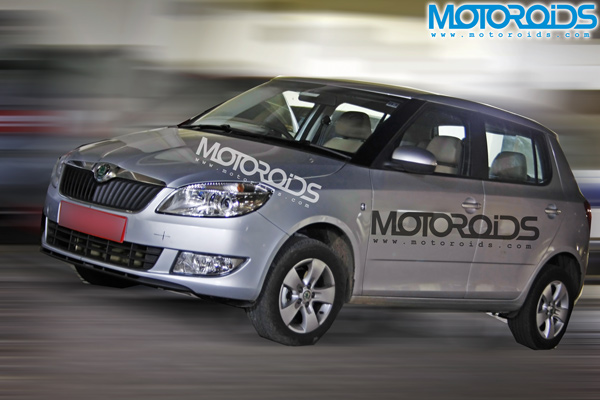 Our sources close to Skoda have confirmed that the 2010 Fabia facelift will be launched on the 24th of September 2010. Skoda India is readying the media cars and test drive vehicles. The media cars are expected to reach most magazines later in a day or two while the test drive vehicles will be at the showrooms by the 21st of this month. Stay tuned to Motoroids as we bring you more info on the pricing as soon as it is available to us.

The latest update from our sources about the 2010 Skoda Fabia facelift is that the petrol variant has finished the homologation procedure. The diesel version should finish the process in another week. We’ll try to get you the fuel efficiency figures soon…

What you can see here are photos of the 2010 Skoda Fabia facelift that is all set to replace the current model in India. Since we had brought you the news earlier along with a hazy picture of the test mule clicked by our friends at Velocitimag, we’ll now keep the words low and concentrate more on the detailed scoop shots that we have here.

1. The new fog lamp unit gets day time running lights too in Europe but in India the DRL is replaced by an orange bulb. Additional turn blinker? We doubt…

2. The 2010 model gets wider headlights with a ‘3D Design’ to compliment the ‘horizontal’ body form of the Skoda Fabia. Placement of the projector (dipper) and multifocal reflector (upper) interchanged as compared to the 2008/09 model

3. And finally, the wider and redesigned radiator grille

Contrary to the earlier reports, the 2010 Skoda Fabia gets interiors that are more or less the same as the current model. Only noticeable changes are the ‘numbered’ buttons on either side of the music system’s display and the chrome garnish on the gear knob (circular inset) and the A/C vents (rectangular inset)

With the new BSIV emission norms in place, Skoda has had to either upgrade their engines or axe a current model (like the Skoda Octavia) to abide by the new laws. The Fabia hence gets two new engines and chucks the three engine options (1.2/1.4-litre petrol and 1.2-litre diesel) that powered the current generation model. The 2010 model will now get a 1.2-litre, 75PS petrol engine (still bearing the HTP tag) and a 1.2-litre, 75PS  TDI Common-Rail diesel engine, both from the Polo 1.2 twins. We are told that the 1.4-litre variant may soon be replaced by a 1.6-litre diesel variant and will bear the ‘vRS’ tag. Seems like a possibility considering that Skoda’s parents,Volkswagen, are all set to give the Polo a 1.6-litre upgrade anytime now.

Though it was speculated that the new Fabia will be cheaper than the current model, our sources tell us that the prices of the 2010 facelift model will remain similar to the outgoing model i.e. between Rs. 5.5 – 7.75 lakhs (ex-showroom). Both the cars are currently undergoing homologation for the new engines and should hit the showrooms floors by September 2010. Deliveries of the 2010 Skoda Fabia facelift are expected to commence by Diwali.

No noticeable change on the taillights, though our spy photographer says that the new units have a slightly clearer lens