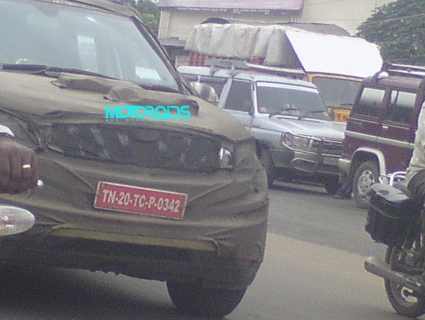 We posted a lot of photos and videos of the upcoming Mahindra & Mahindra W201 world SUV and are eagerly waiting for the butch vehicle to make its debut. But Mahindra it seems, is still not content with the two years of testing that the W201 has undergone. Our members and avid readers, Richie and Vibhu have brought us new photos of the W201 on test. This time around, the test mule has to lumps on the bonnet section of the camouflage – indicating that either of them is an intake scoop or the lumps have just been added to create more curiosity or to hide some design lines. Refer to the ‘Related Posts’ box below for more information on Mahindra and Mahindra’s upcoming 2011 world SUV codenamed W201!