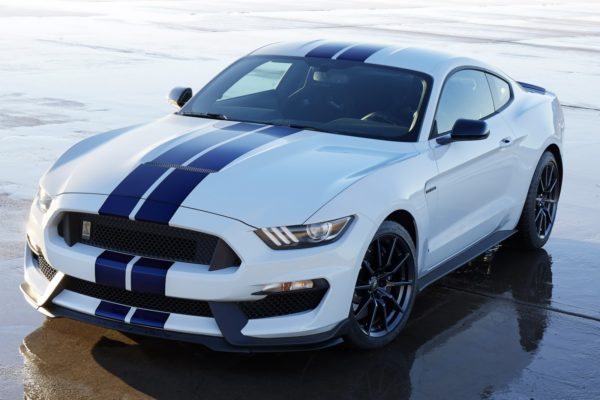 The legendary Shelby GT350 name is back for 2016. For the first time in almost 50 years, a factory Mustang wears the coveted Shelby badge. The new GT350 will follow in the footsteps of the erstwhile 2013 Boss 302, and might turn out to be the most competitive of the breed. The 2016 Shelby GT350 is based on the latest “S550” Mustang chassis, and will feature Ford’s first suspension with magnetorheological dampers, unique bodywork that’s shaped for aerodynamics first and everything else second, and a naturally aspirated 5.2-liter V-8 with a flat-plane crankshaft. 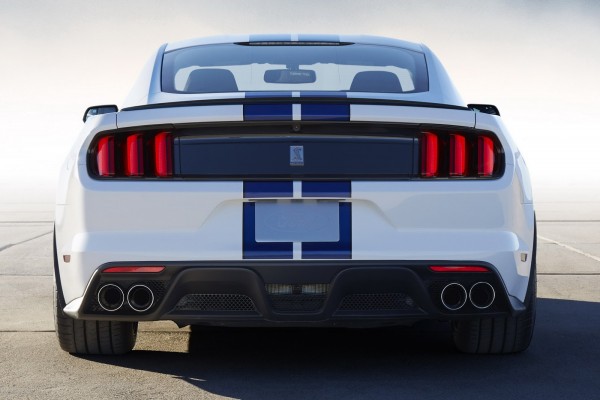 Official power figures haven’t been revealed yet, but the V-8 engine adopts a Ferrari-inspired fancy flat-plane crankshaft design design, which involves attaching the crank pins at 180-degree intervals rather than the usual 90; which allows for a firing order that bounces back and forth between the two cylinder banks with little to no overlap in exhaust pulses. Expect north of 500 horsepower and 400 lb-ft of torque from the high revving, naturally aspirated motor. To put things in perspective, the Boss 302 made 444 horses and 380 lb-ft from a naturally aspirated 5.0-liter V-8, and the new Mustang GT makes 435 horses and 400 lb-ft from its updated 5.0 liter V8. 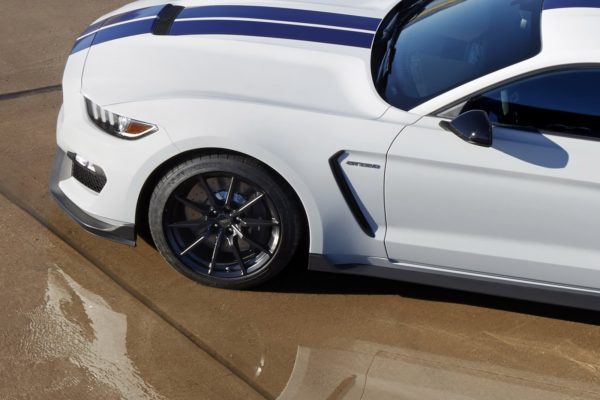 Unique to the Shelby GT350 is the MagneRide suspension system, Ford’s first-ever application of the continuously controlled magnetorheological damping system. This setup alters shock stiffness at each corner independently every 10 milliseconds based on the car’s yaw angle and suspension load. In the Shelby, the suspension can be cycled through five modes, which also control steering effort, throttle sensitivity, the exhaust, and programming of the ABS and traction- and stability-control systems. Compared with the regular Mustang GT, the Shelby has tweaked springs and bushings, a wider front track, and a lowered ride height. The new ShelbyGT350’s rigidity is bolstered  by an injection-molded carbon-fiber-composite grille surround(!) and an optional lightweight strut-tower brace.

For that ferocious stopping power, Ford has opted for two-piece iron rotors, measuring 15.5 inches up front and 15.0 inches at the rear, for the GT350. Up front, six-piston Brembo calipers do duty on the front discs, while four-piston units are installed at the rear. The new ShelbyGT350 sports 19-inch aluminum wheels which stand at 10.5-inches wide up front and 11.0-inches wide out at the back, wrapped around some custom, sticky Michelin Pilot Super Sport rubber. 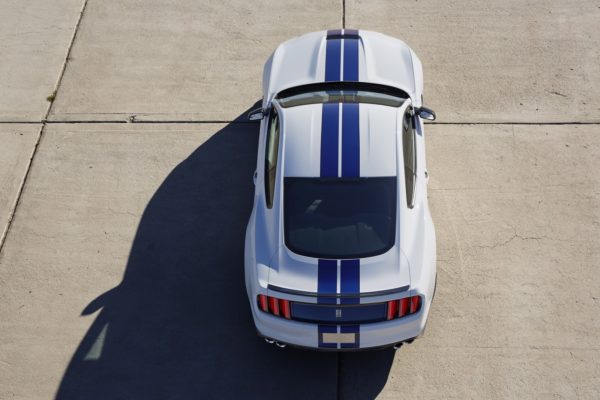 For those lusty, desirable looks , every body panel aft of the A-pillar is unique to the new Shelby, with a lower, steeper aluminum hood designed to more tightly hug the engine below, while a large central heat extractor maximizes under-hood airflow and is said to reduce front-end lift. The insides are littered with Recaro sport seats and a flat-bottom steering wheel while an optional Tech Pack brings power seat adjustment and leather upholstery, dual-zone automatic climate control, upgraded Shaker audio, and the eight-inch MyFord Touch infotainment screen.

The new Shelby GT350 will debut in the flesh at the Los Angeles Auto Show.