Home News Say hello to Citigo, a VW Up in Skoda’s clothing for India 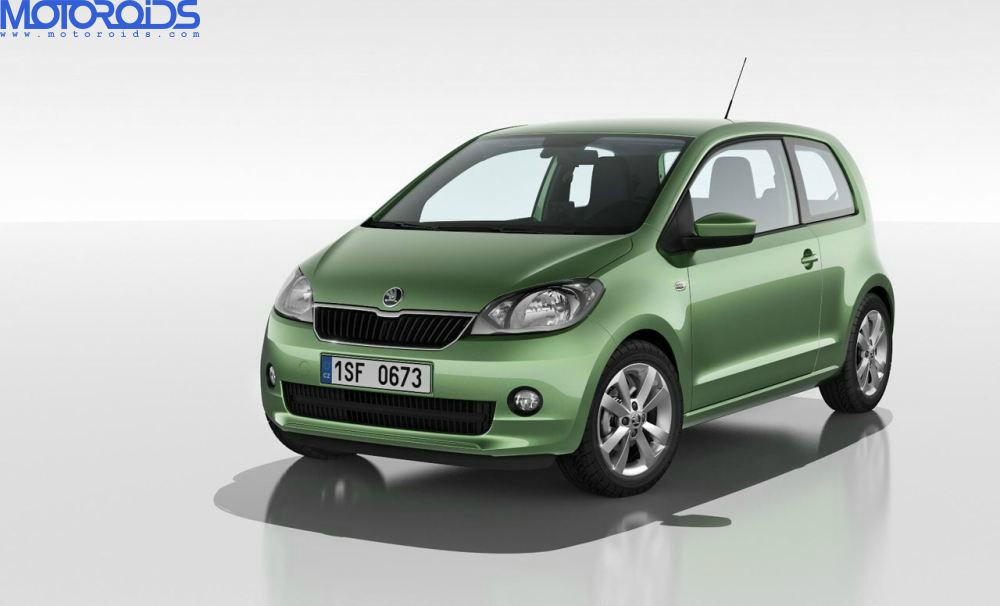 These are the first images of Skoda’s new city car based on the VW Up platform. The car existed in rumors only thus far, but it’s here now, in the real world. The Skoda Citigo will exist with the VW lineup just the way the Fabia lives with the Polo, the Laura survives with the Jetta, Superb with the Passat and the way the Lauretta is expected to co-exist with the Vento. The car will first be launched in the Czech car market, but it won’t take a genius to realize what a fabulous product it is for the Indian market. A launch here is almost an eventuality, especially in the view of the fact that VW will sure as hell bring it’s Up city car here, which is the base for the Citigo as well!

Internationally, the car will be powered by two gasoline engines, both 1.0-liter three pot mills, but in different states of tune. One will produce 59bhp and the other 74bhp with a claimed 165+ kmph top speed.  The two engines are claimed to deliver fuel efficiency of 23.82 kmpl and 23.25 kmpl respectively. Impressive!

For the Indian market, Fabia / Polo’s 1.2 liter petrol and diesel engines have a strong possibility of going under the Citigo’s bonnet. The car, as we mentioned earlier will be launched in the Czech Republic in late 2011, followed by a UK launch in 2012. The car should make it to India late 2012 to early 2013, if Skoda green signals it.

Citigo’s design is rather minimalistic, but the designers at Skoda have given the car a distinct look which defines it as a new ŠKODA. The radiator grille and the headlamps are unmistakably a Skoda. The Citigo will measure just 3.56 metres long, 1.65 metres wide and 1.48 metres high. The wheelbase for the car measures 2.42 meters, and boot volume measures a reasonable 251 liters, expandable to 951 liters.

The interior design will include numerous storage compartments, cup holders and multimedia systems, as well as storage pockets on the sides of the front seats. In addition, a special bag hook integrated in to the glovebox handle, and a photograph holder on the central console, are two clever interior elements. The car in the pictures here is a two door version. For India, the car will spawn two more doors, and would probably grow in length a bit too.

For the first time in a ŠKODA vehicle, a portable navigation system is available. The device is fitted to the dashboard and can be removed easily and used on the go. Being an integral part of the vehicle’s onboard electronics, the system provides not just navigation, but also hands-free calling with built-in Bluetooth and onboard infotainment. Using a 5-inch touch screen, the driver can view important information about the car (onboard computer, optical signals from the parking sensors, etc).

The international version of the Citigo has been loaded tight with safety features as well. For the first time in a ŠKODA vehicle, the designers have used a Head-Thorax side airbag to protect the heads of both the driver and the front seat passenger. In addition, active safety is enhanced by the ‘City Safe Drive’, a new brake assistance system based on a laser sensor that is activated automatically at speeds below 30 km/h when there is danger of a collision.

The Indian version if and when it comes will be thoroughly stripped down to match the needs of the cost conscious Indian buyer. This is one car which would help Skoda propel itself into the volumes segment, a feat the Fabia hasn’t quite been able to pull off for the Czech carmaker. While nothing official about an India launch has come out, we expect this car to be priced around Rs 3.5 lakh when it arrives here.

Your views, comments and critique on the car please!