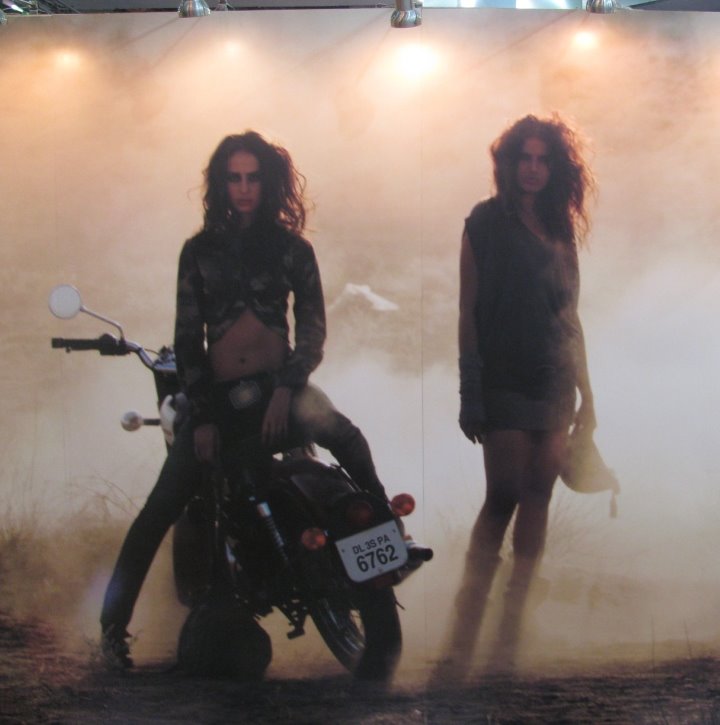 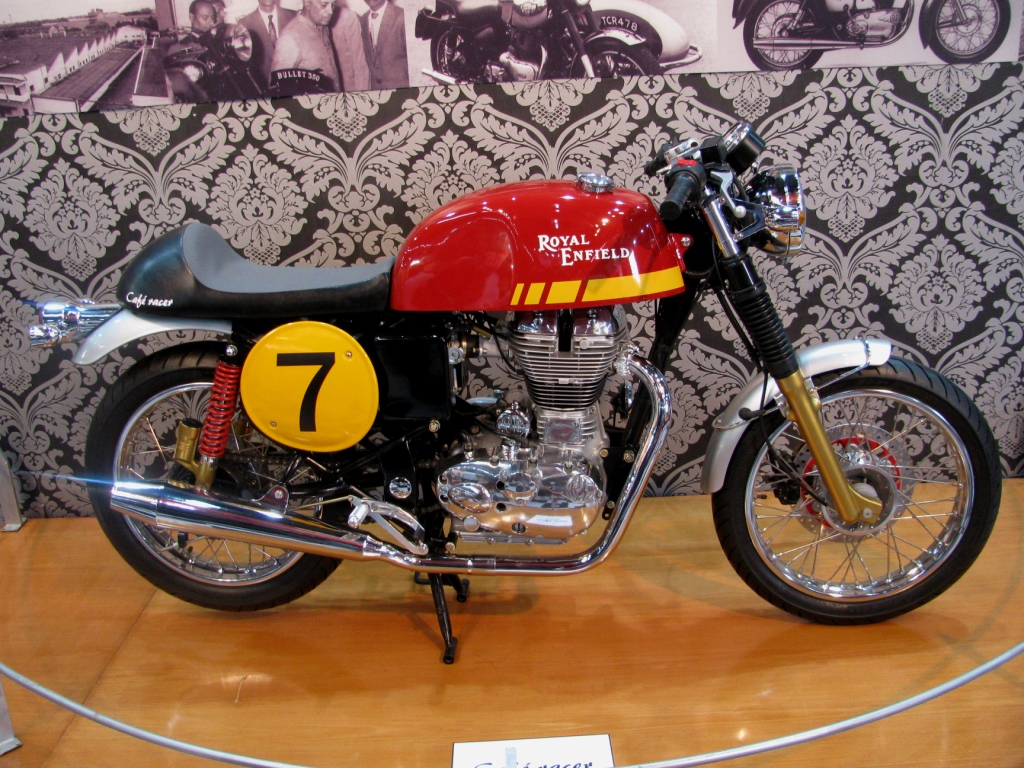 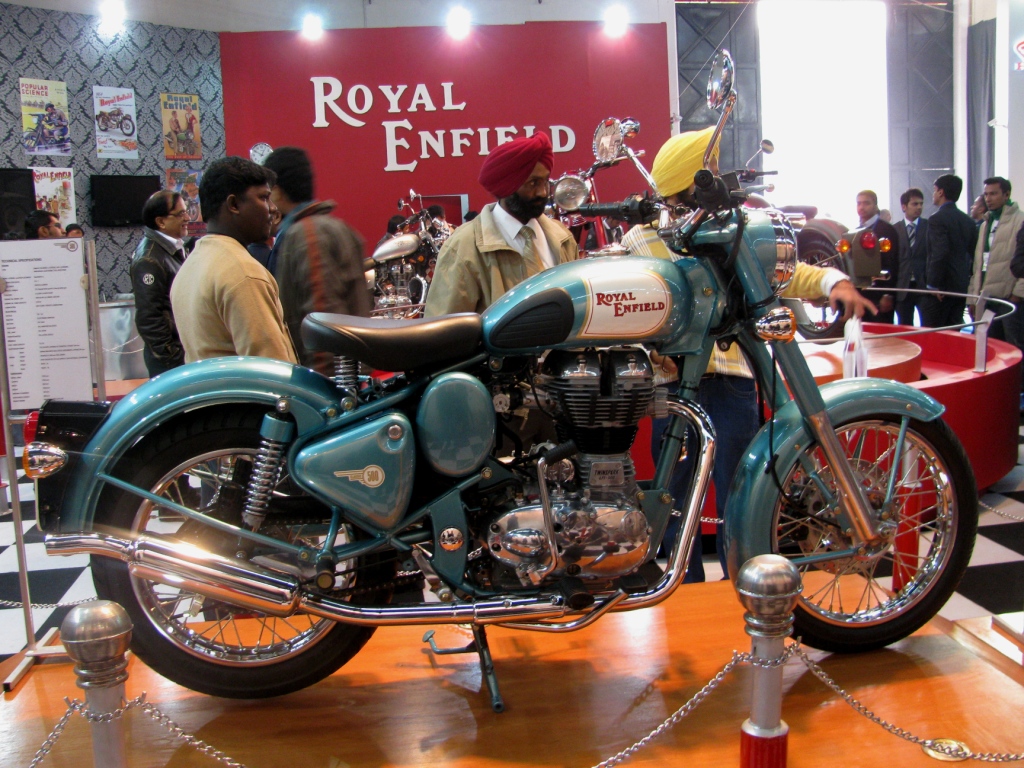 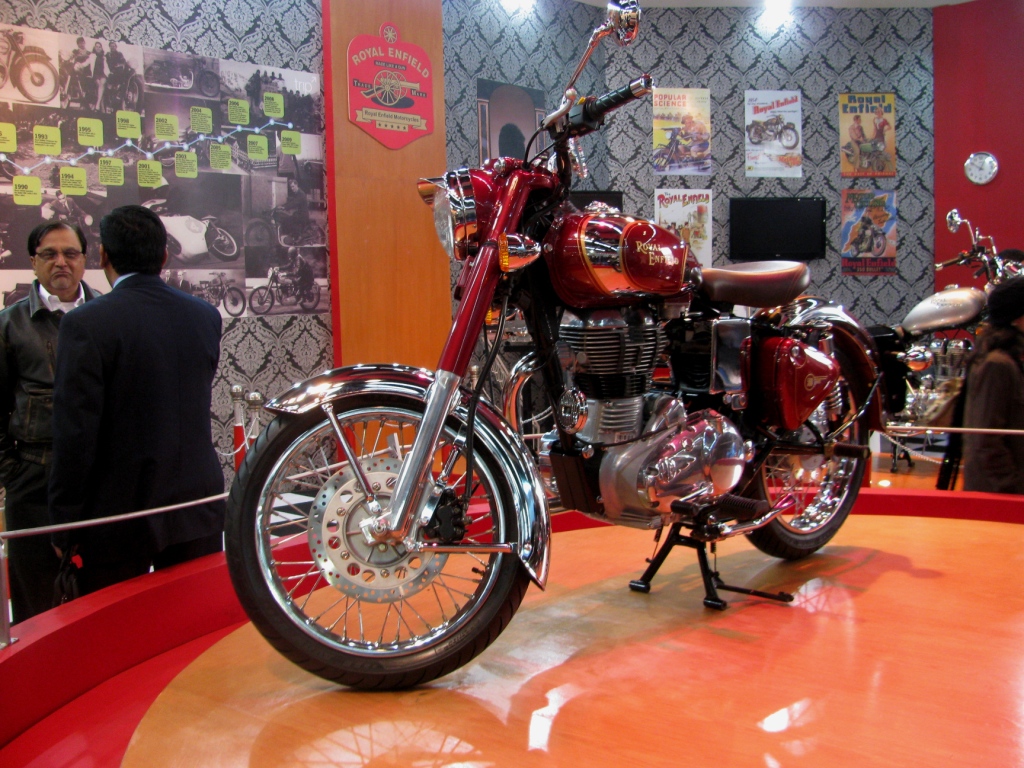 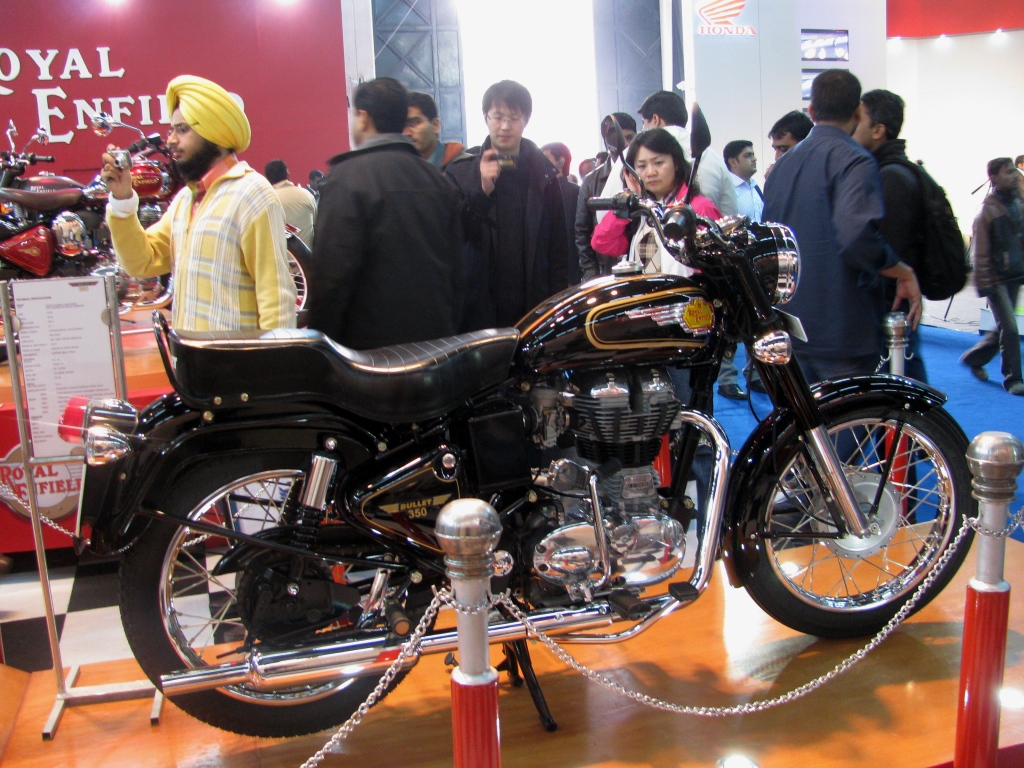 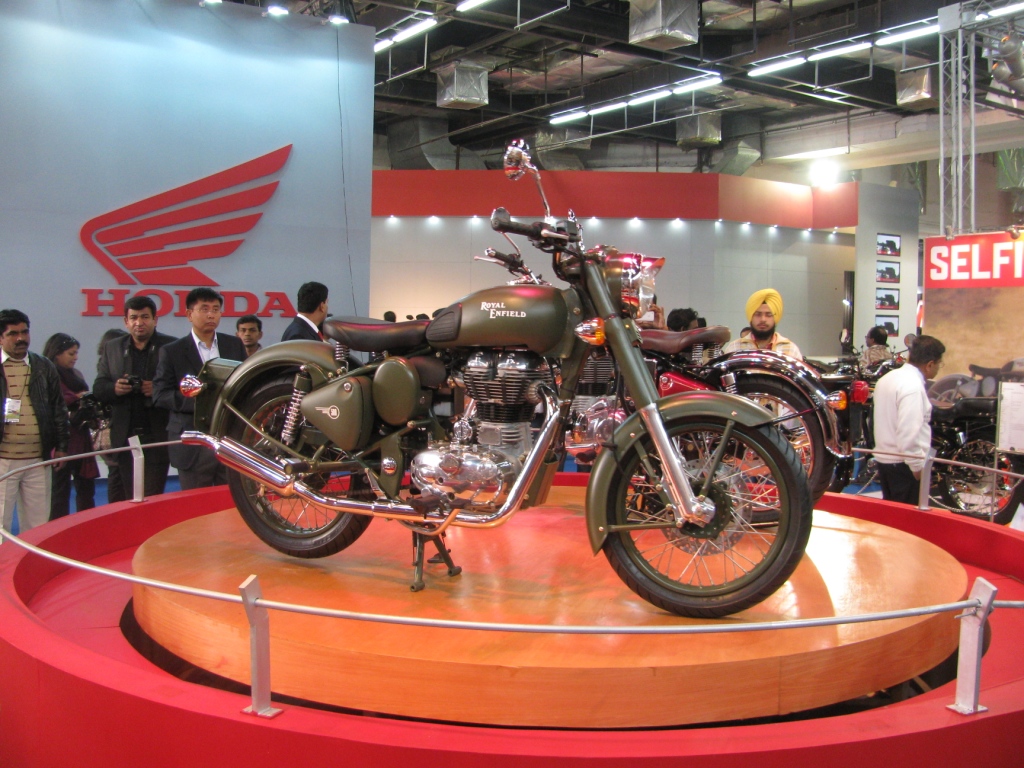 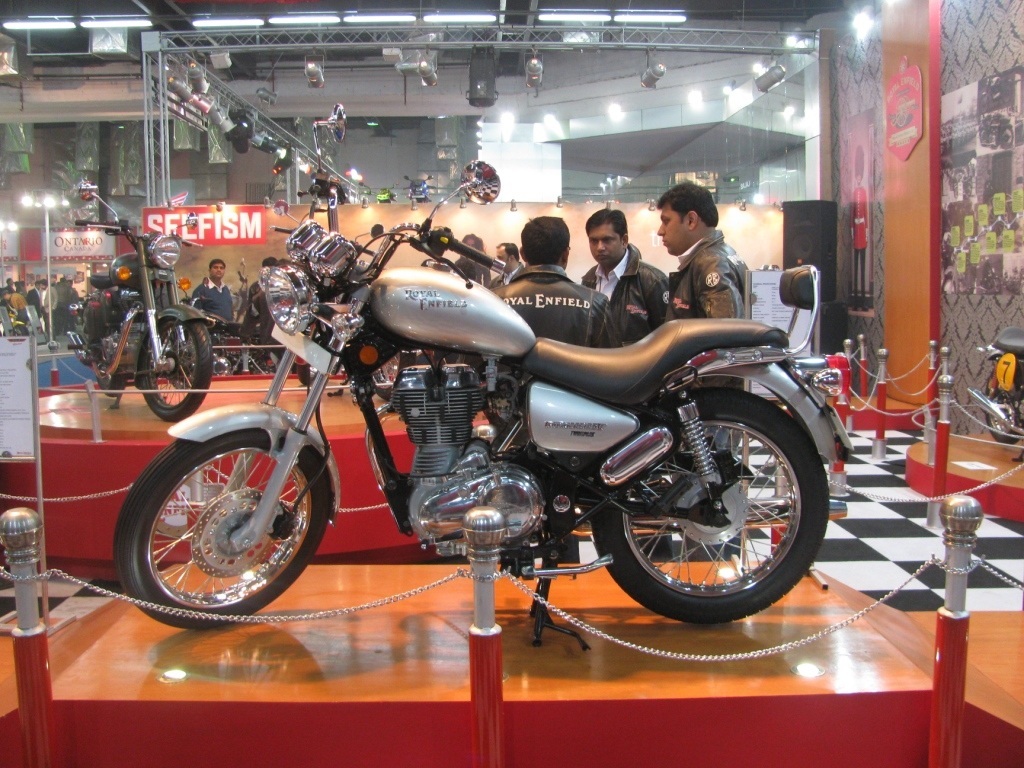 Royal Enfield showcased the new EFI bikes had had been launched recently, at the expo. There were three bikes, one in two tone peacock blue and cream, one without any chrome at all in military olive green, and another with enough chrome to give the HD bikes a complex. All of them were crowd pullers – the classic look of the new bullets is just right. Along with them was a classic 350, in black. The thunderbird twinspark was also visible on display.

Royal Enfield had also chosen to show the cafe racer concept in red and yellow colours though it is not clear as to whether they will manufacture that beast at  a later stage, or if at all. A couple of cutaway engines were also on display, which showed the differences between the original engine that has been helping Bullets gain momentum for the last 50 odd years in more or less the same form, and the spanking new 500cc unitary construction engine which now powers the Bullet Classic. Royal Enfield is confident that their new engine will contribute to trouble free riding as their engine has now been extensively tested in European and North American markets 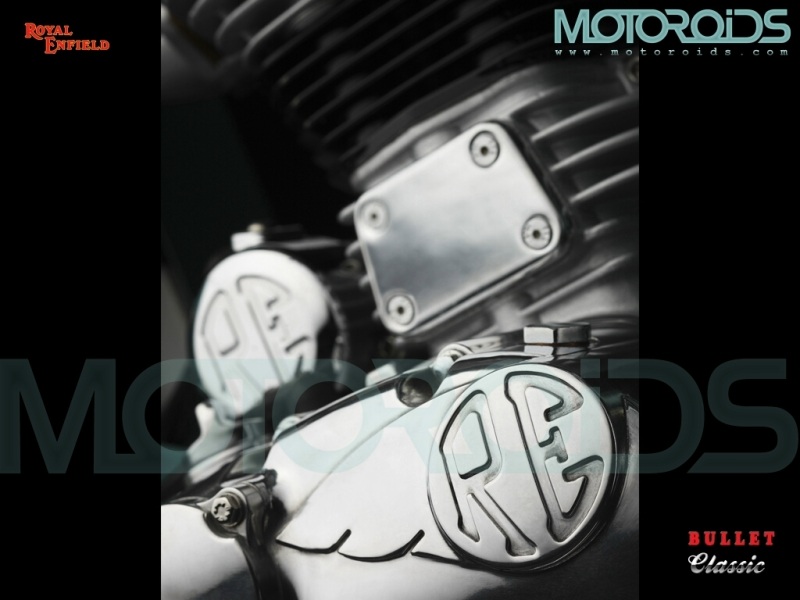 We have to admit that Royal Enfield in 2009 did take a giant leap forward from its ‘old- Bullet charm’ to ‘finally hugging technology advancements’ by rolling out the Classic 500 and the Classic 350. The community however, has evoked mixed feelings upon the launch of the Classic which possesses twin spark engine, fuel injection and tubeless tyres. 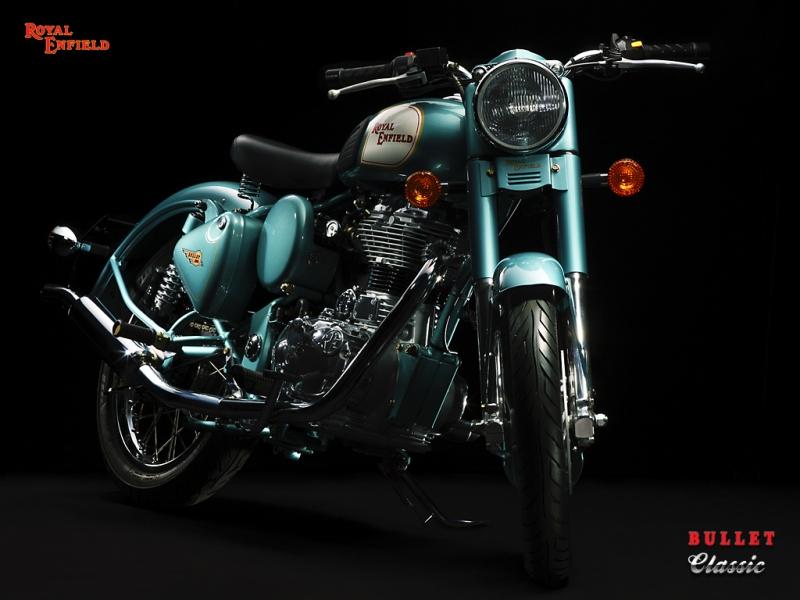 They say, with all these technologic inclusions, the Classic has lost its old-skool charm and the so called ‘thump.’ We however think that this is indeed a great effort on the behalf of the company. While we hope to see more of such advancements, we also pray that all the modern amenities do actually work on the Classic and not make us stranded on the highway with failed electricals.

Royal Enfield, is also one of the company’s which have successfully been able to create a huge number of hard- core, loyal community by organizing the annual events like the Rider Mania and the Himalayan Odyssey. In 2009, the company added two more of such ride events- The Southern Odyssey and The Tour of Rajasthan. The company’s booth at the Auto Expo this year will showcase the Classic variants and probably be the only place, where you might get to see the Classic in flesh before it hits the showrooms by end of January.

The company may showcase the café racer and scrambler variant which will definitely attract the audience towards the Royal Enfield Stall.