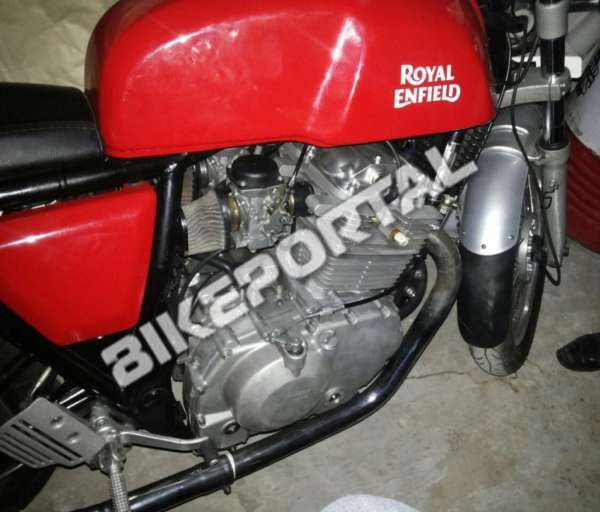 Here is something that would bring a grin on the faces of all Royal Enfield admirers. If these latest set of spy images are to be believed, Royal Enfield may soon come up with an all new engine, the most powerful in its lineup ever. The images here reveal that Royal Enfield may soon bring in an all-new inline twin engine, rumoured to have a capacity of 750cc. As seen in the images, the engine is being tested within the chassis and the bodywork of a Continental GT motorcycle.

Unlike any other Royal Enfield motorcycle, this engine would be oil cooled and hence expect better specific output. We can also see twin carburetors along with two air filters sticking out, hardly managing to fit into the limited space that Continental GT’s chassis has to offer. The engine is still in the development stages but according to the original published article, expect this DOHC twin-carburetor motor to deliver over 50 hp of power and 60Nm of torque. 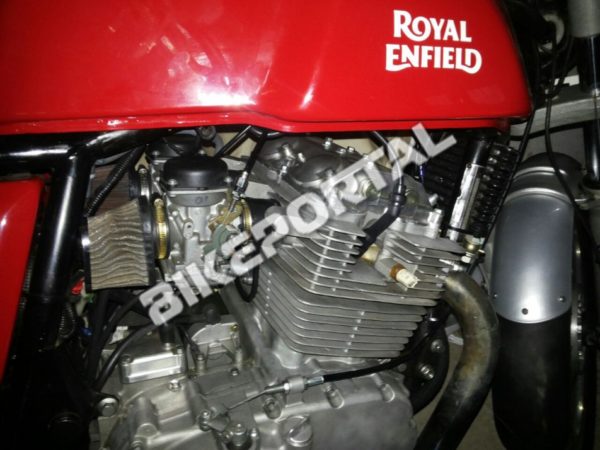 In order to develop the new product, Royal Enfield has employed big international names from the motorcycle industry. The two-wheeler manufacturer recently hired Pierre Terblanche, one of the most respected motorcycle designers in the world and the person who is responsible for designing Ducati motorcycles such as the Multistrada, SportClassic, Hypermotard, and the 749/999 supersports bikes. The company has also hired Rudratej Singh, former Vice President of Unilever’s Home and Personal Care and Foods Marketing Operations, as the company’s new President. As we reported earlier, the two-wheeler manufacturer would also be investing Rs 500 crore for establishment of new technology centres and increasing the annual production capacity of their motorcycles.

Although these images seem legit and we are really happy to hear about this latest development, we hope that this is not an individual mod job. What do you have to say about these new spy images revealing the new motor from one of the most beloved brands in the country? Share your views with us and fellow enthusiasts through the comments section below.