Only yesterday we reported about the crash of a 2014 McLaren 650 S Spider and now we have some pretty bad news from China.

According to WreckedExotics, a long transportation truck carrying luxury vehicles and supercars in China recently caught fire. As can be seen in the image, all the tyres of the truck have melted and only the rims are visible. A couple of exotic cars were involved in the incident and were charred to metal shells. 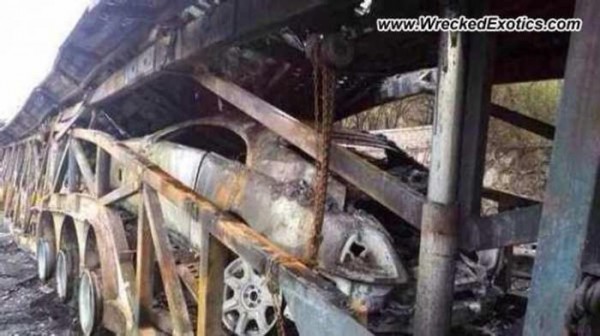 Although not much details are available about the incident, the website reports that along with the Rolls Royce Wraith, an Audi R8 and a Porsche Cayenne were also burned in the fire. This is the first documented incident involving a Rolls Royce Wraith. Everything except the metal construction of the car seems to have melted.

The insurance company which had provided the transit insurance for the cars on the truck was obviously distraught.