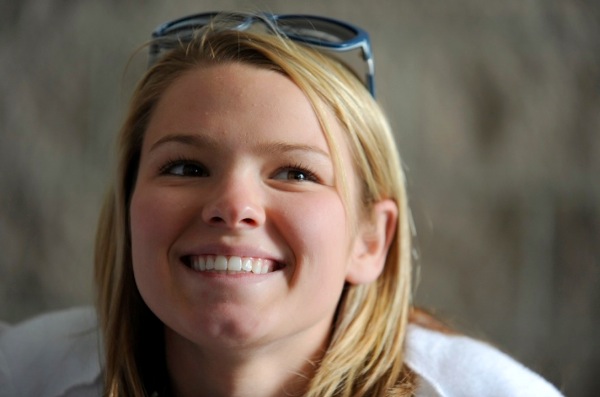 Elena Myers, the female motorcycle racer who has etched her name in history after securing the first place at the AMA Supersport Championship race at Infineon Raceway on May 15, 2010 is now rightfully eyeing at her next stop- the MotoGP series! The 16 year old Californian has been invited by Rizla Suzuki to ride its GSV-R bike on the Valencia circuit later this year. The ride is believed to be scheduled after the last round of the on going season on the Ricardo Tormo circuit on November 7.

“We saw that she was doing quite well over here on her Suzuki,” said Tim Walpole, Rizla Suzuki MotoGP Press and PR Officer, during the US MotoGP round at Laguna Seca. Back then, Myers had the opportunity to visit the team’s garage and got a first glimpse of the MotoGP world during the US event. “We thought she might like to come by the box and get to meet the guys and have a look at how we do things,” added Walpole.

The 16 year old racer was ecstatic with the invitation to ride a MotoGP prepared bike from Suzuki. “It blows my mind that people like that are kind go looking at me and the AMA stuff. To get this opportunity is a once in a lifetime kind of thing,” said Myers, who revealed she had a nice and interesting conversation with MotoGP veteran Loris Capirossi during the Laguna Seca event. “It was really cool, especially talking to Capirossi. I have a lot of respect for the guy but even more now that I’ve talked to him. I thought he was a really down-to-earth guy. Talking to him was just crazy, to say the least.”

Myers was also given the opportunity to sit and push the throttle of the GSV-R in the garage, but admitted she never even considered being offered the chance to ride it for real, on a MotoGP circuit. “If I could ride it that would just be the most insane thing ever, even if it was for just a couple of laps. I’m just speechless about it, it’s so crazy. It was all pretty overwhelming, but that’s where I want to be some day. And this just makes me want it even more now. I’m going to be motivated no matter what, but seeing what this is all like makes me want it even more,” added Myers.