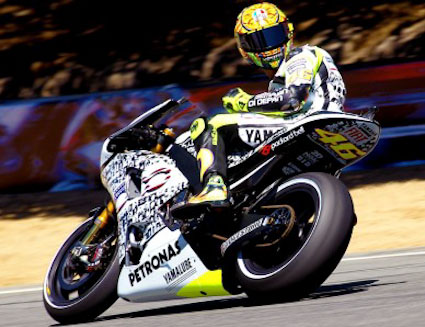 No this is no modern-day Shakespeare talking but a journalist who got confused, thanks to the rumours surrounding two great Italians.

We are talking about the G.O.A.T Valentino Rossi and his plans of shifting to Ducati. There have been rumours about his switch and thanks to the growing rivalry with Jorge Lorenzo, all the rumours of the Doc moving out of Yamaha are strengthened.

According to Crash.net, Ducati CEO Gabriele Del Torchio in an interview with Cycle World almost confirmed Rossi’s move to the Italian marque’s MotoGP team. Torchio said, “This season will not bring to Ducati any crown in the sport, but I look forward to Valentino Rossi teaming up with Nicky Hayden. Nicky is a wonderful person and a great rider. This year, he greatly contributed to improving our Desmosedici racer. Next year, he and Valentino will hone the bike to its ultimate winning potential.”

This bout of happiness proved to be shorter than I had thought as moments after this news, Ducati came with an official statement saying that all this is nothing but a rumour and they(Ducati) will make things official soon, that is if Rossi plans to make a switch.

Here is what Ducati said, “Regarding the recent allegations attributed to Gabriele Del Torchio – Ducati CEO and President, Ducati states that no agreement has been reached with the riders Valentino Rossi and Nicky Hayden for the future Moto GP season, although our interest in these riders remains. We would like to say that the recent news which has appeared on the US website Cycle World and other websites has been misreported and must be attributed to the many rumours circulating lately. Whether and when an agreement is reached, official press releases will be issued.”

Shouldn’t we stop anticipating Rossi’s plans and wait for his decision at Brno. We can’t, right!