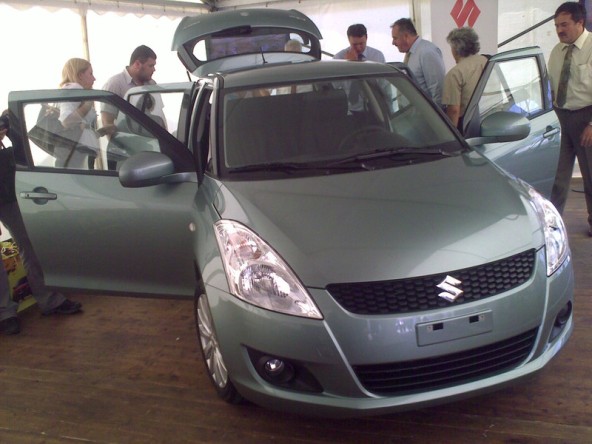 As one of the biggest unveiling of the year, the 2011 Swift is now out in the open. The car looks slightly bigger than its earlier version, and seems to have got a heavy doze of in cabin features and amenities. Feast on the most clear images yet of the interior and exterior of the new car and read the description of all the changes in the new car … here we go!

We have managed to decode the new Swift entirely in the past fifteen minutes. For all of you who have always found it difficult to differentiate the new and the old Swift, here are all the differences, decrypted.
1.    The headlamps on the new car are longer and bigger than the earlier version. They now sweep back further towards the front door in a bid to give the car a more front forward and sporty look.
2.    The tail-lamps follow the design philosophy applied at the front and they are longer than the ones on the earlier car too. They are elongated towards the rear fender and extend further towards the rear door into the haunches. They now also have a clear lens panel housed in the tail lamp assembly running across the length of the tail-lamp.
3.    At the front there is a freshly inserted crease that starts from the inner line of the headlamps and extends into the front bumper, surrounding the air-dam and making a trough-like shape.
4.    The quarter panel in the rear windows has been extended further towards the back, suggesting some increase in the legroom at the back bench.
5.    There is a recess at the place between the hatch door and the rear bumper. Unlike the earlier car, the hatch door doesn’t have a recess in itself for lifting it up, you have to hold it from where it ends. The horizontal crease in the rear hatch door too has been replaced with a clean look.
6.    The central air dam in the front is now bigger and the fog lamps too are placed in a differently designed housing.
7.    The bonnet is apparently one inch longer
8.    The radiator grill which was of an angular, trapezoidal shape earlier is now more curvaceous and forms a smiley
9.    Inside the cabin the car gets a brand new steering wheel and many new buttons on it
10.    It seems like apart from the volume controls and other basic functions, the car in the pictures also has cruise control
11.    The instrument panel is totally jazzed up with a digital readout placed between the speedo and the tacho. It seems to be quite elaborate with a lot of information available on the digital screen. We are damn sure it now has a trip computer too.
12.    The dashboard has been overhauled too. The materials seem to be of a better quality now and the round AC vents on the earlier car have been replaced with, angular ones with aluminium bezels on the central twins. AC vents have been replaced
13.    The centre console has been totally changed and it now looks much more jazzy than the drab-looking earlier version. It seems to feature an advanced stereo system along with climate control.
14.    The gear shifter knob, the hand brake lever and the seats have not been changed, if our interpretation of what our Hungarian friends wrote was correct.
Nothing has been written about the engines and transmission yet. But we are on the job, and will dig out more information and pictures than anyone else, and sooner! So count on us and stay tuned!

Many thanks to Totalcar.hu for the images