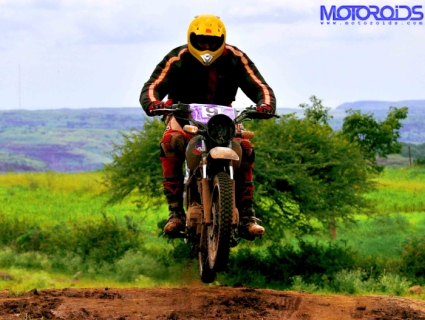 Pitstop Motorsport Club’s maiden event, the 2W Rally of Nashik sponsored by Birla Roadmaxx tyres, got underway on the 29th of August 2010 at the village of ‘Paaste’ near ‘Sinner’ taluka. As we had reported earlier, the number of entries for this event were restricted to 30 and hence it wasn’t very difficult for Pitstop of have these entries filled up in good time. However, after the scrutiny on 28th of August, 5 two wheelers out of the participating 30 were declared ineligible for the rally. As the remaining 25 entries geared up for the event, the rain gods decided to pay homage to the proposed track and made sure that it was full of slush for Sunday’s rally.

Fortunately for the participants, the rainfall lingered around only on the Saturday and Sunday was business as usual. As the event got underway the time attacks began in style. Two riders, Ganesh Lokhande and Paritosh Kohok, who returned to competitive racing after 8 years, battled it out on their Group B Karizmas. Paritosh Kohok gave a close fight to Ganesh Lokhande and even put up a better show than Lokhande in the last stage, however Ganesh’s consistency throughout all the prior stages gave him a 14-second lead over the competition, announcing him the overall winner of the motorcycle class. Another Group B Karizma rider Kalyan Jhambekar and Group C TVS Fiero rider Mansingh Thakur were fighting for the 3rd spot of motorcycle-class podium. Unfortunately, Kalyan’s Karizma failed during one of the stages and the resulting loss of time dropped him all the way down to the fifth spot. Mansingh soldiered on and took the third place.

The scooter class was as action packed as you would expect. Veteran rider Shamim Khan had a flying start with his Mahindra Rodeo as he led the rest of the pack for the first two stages. From the third stage onwards though, Sameer Kulkarni, aboard his well tuned Kinetic Honda started clocking stage timings that were 5 seconds faster than Shamim Khan. The crowd was looking forward to a three-way battle between Shamim, Sameer and another veteran rider Freddy Elavia. Freddy’s vehicle however got caught up with mechanical issues and hence he had to retire. The other two racers were in a class of their own and by the time they finished the final stage, there were 16 seconds between winner Sameer Kulkarni and second place finished Shamim Khan and a colossal 8 minutes between them and third place rider Amarjeet Bansal!

Novice Class had some healthy competition between Shashank Shevale, Nilesh Thakkre and first timer Suraj Kute. A three-second penalty saw Nilesh fall back during the early stages but he came back to claim the second spot on the podium. Shashank Shevale took victory while Suraj finished in third.

During the course of the event, a rider named Vineeth Kurup had a massive crash at SS 4 was rushed to the hospital immediately. Vineeth was diagnosed with an elbow dislocation and certain minor injuries. While Vineeth’s crash slightly lamented the event’s spirit, a spirited performance by first timer Nishit Zhaveri lifted the enthusiasm yet again. There was more joy when the motorcycle-class and scooter-class winners Ganesh Lokhande and Sammer Kulkarni brought home the trophies for team JAWS Racing (Janhavi Auto Works & Service) and also won the Tuner Trophy for their team leader Sujit Kalsekar. Overall, it was a solid start of Pitstop Motorsports Club’s operations as they aim to organize more such events in and around Nashik. Image Gallery on next page>>>