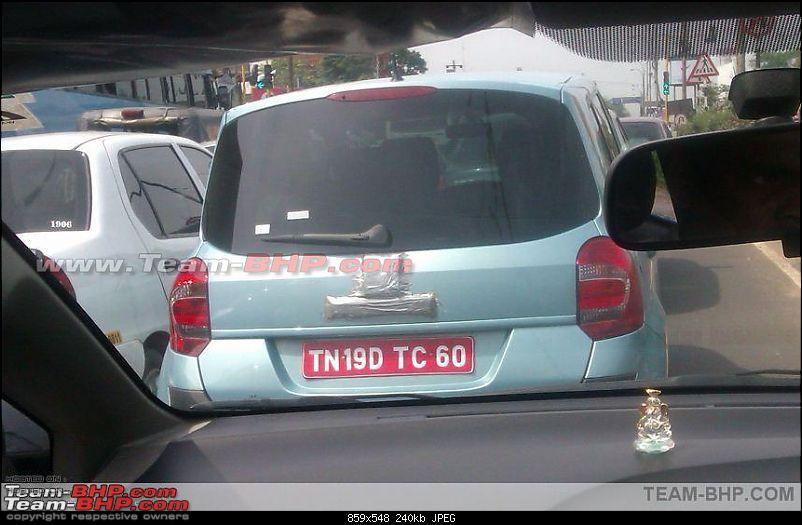 Renault is getting more aggressive in India every passing day. After launching two premium products, the Fluence sedan and the Koleos SUV, the French carmaker is now eyeing the volumes segment. The company is planning to launch a small car in India. If one has a look at the company’s website in India, there is a graphic which depicts its product launch schedule till September 2012. After the Fluence and the Koleos the next car in the line is a small hatchback, and these images of a test car reveal, that car is the Modus. The test mule of the Modus was caught testing in Chennai near Renault-Nissan’s new plant

According to Renault india launch timeline, the Modus will be launched in January at the 2012 Auto Expo. The Modus shares its platform with the Clio hatchback, but has a taller roofline, and boasts of better cabin space. The Modus is available in two body type variants – Modus and Grand Modus. The Grand Modus is a slightly longer version of the Modus and has more cabin space and storage area. However, the Grand version being longer than 4 meters won’t make it to India in all probability as it would not be able to avail the excise duty cut.

The Modus will be powered by the same petrol and diesel engines which power the Nissan Micra. The 1.2 –petrol unit produces 75bhp of peak power and 104 Nm of peak torque. The 1.5-liter dCi diesel engine on the other hand 64PS of power at 4000 rpm and 160 Nm of torque at 2000 rpm.

Although the Modus looks like a hatchback, Renault prefers calling it a Mini MPV so as to highlight the space within. The Modus is a practical, although it does have the idiosyncrasies which are typically associated with cars from Renault in terms of design. The car looks different, and not very pleasingly so. While the Fluence and Koleos are more conventional in their design, the Modus is a good exponent of Renault’s quirky design ethos.
Among Modus’ USPs apart from the space inside is its unque seating arrangement for the back bench. The rear seats of the Modus slide on rails and can adapt themselves to provide more shoulder and legroom for two hefty passengers or accommodate three usual Homo sapiens. Renault calls this as the ‘Triptic System’. Another features is the ‘Stay Put’ system which lets the base of the front passenger’s seat to flip up and reveal a storage area.

The Modus will be manufactured at Renault-Nissan’s Chennai facility near Oragadam. The company should make sure that the Modus has a high localization percentage, or it would be difficult for this different looking hatchback to sell in the company of more powerful and popular cars such as the Swift, Honda Jazz and its own Group cousin Nissan Micra.

The Modus was the first ever small car to get a 5 Star Euro NCAP rating. However, for India the equipment list will be snipped to make it more affordable. Expect the Modus to be priced at the level of the new Swift.