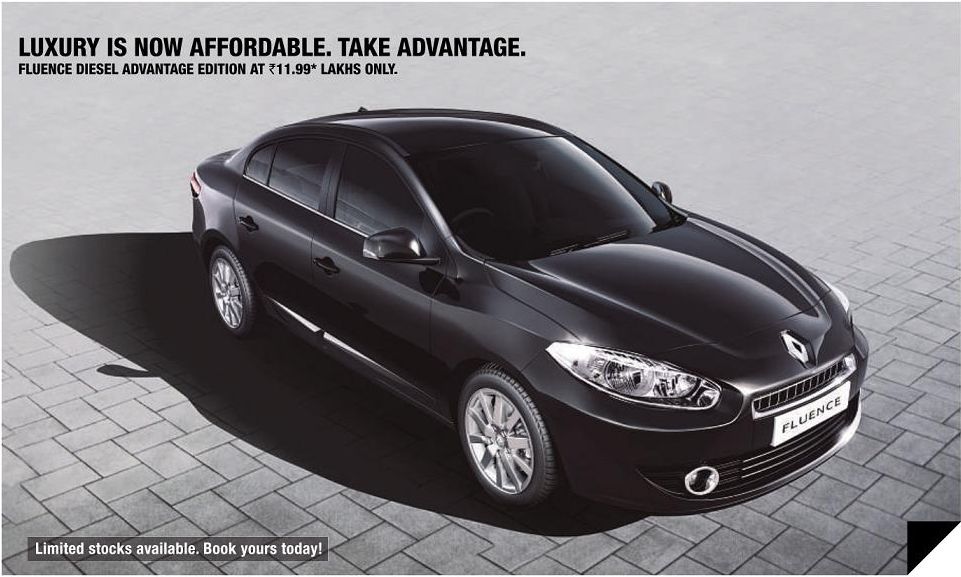 Our regular readers will know that I have always liked the Renault Fluence because of its French flair. Also, the car makes for an interesting option to stand out in a segment full of Japs and Czech cars. Initially, while the Fluence petrol came loaded to the gills, Renault recognized the rising demand for diesels and had launched the Fluence with little fewer bells and whistles (okay, a lot lesser) in the fantastically priced diesel avatar. Recently however, Renault India gave the Fluence diesel some much needed revisions and some of the major shortcomings of the car- lacklustre performance below 2000RPM followed by a jack hammer boost and low equipment level, have been done away with.

Now, Renault, in a surprising move, launches a stripped down variant of the 2012 Fluence Diesel E2. The prices have gone south by a good lakh and a half in lieu of omitting of some of that equipment.

The cut price version of the 2012 Fluence Diesel E2 version is being called the ‘Advantage Edition’ and is being offered for a price of INR 11.99 lakhs. At this price, the car is now a whopping 1.65 lakh rupees cheaper. Now, the “conditions apply” part- the ‘Advantage Edition’ is a limited edition and will be on sale until stocks last. The ‘Advantage Edition’ does not enjoys the advantages of sporting chrome finish on window sill and boot lid, rain sensing wipers, leather upholstery, dual zone automatic climate control, rear AC vents, automatic headlamps, cruise control, rear parking sensors, rear window blinds, electrical adjustments and folding on ORVMs, ElectroChrome rear view mirror and USB and Bluetooth connectivity.

Thankfully, ABS, dual Airbags, ESP, engine start-stop button and alloy wheels have been retained on this new variant of the car. Basically, all the new features that the revised Fluence Diesel was being offered with have been dumped.

Will you buy this stripped down variant of the otherwise well sorted out car?