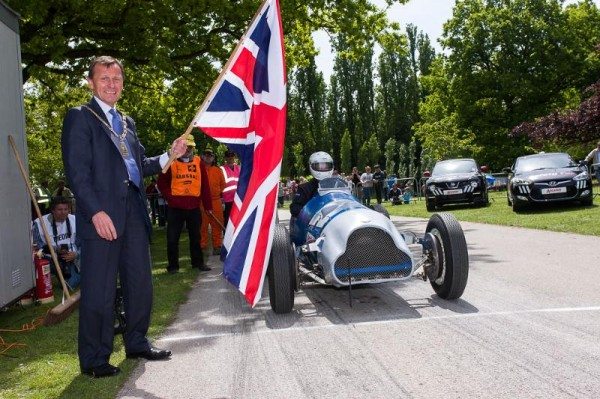 Over 8,000 people enjoyed two fantastic days of racing at Motorsport at the Palace, in association with the Ancaster Group. As the Mayor of Bromley, Cllr. Ernest Noad and his wife Diane waved off the first cars under bright blue skies, it was clear this year’s event would be one to savour. Race fans and casual visitors alike witnessed some spectacular on-track action, which saw the previous lap record smashed and class records tumble across the board.

Existing record holder Gary Thomas, driving a Force PT, shaved almost a second off his previous best time, powering his way around the course in just 32.87 seconds. Away from the track, the Kleers Show & Shine competition was won by Bill Newman’s beautiful Jaguar XK120, while the Jaguar Enthusiasts Club won the Best Club Display on Sunday, with the Stag Owners Club taking the prize on Monday.

Elsewhere, the live motorcycle runs proved as popular as ever and the last-minute addition of Loris Capirossi’s 2003 MotoGP Ducati proved a particularly popular (and loud) attraction.

Event organiser, Sevenoaks & District Motor Club, was again delighted to support local charities, the Royal London Society for Blind People and St Christopher’s Hospice. This year, Motorsport at the Palace raised over £3,500 for these charities, taking the overall total donated to almost £15,000.

Commenting on the event, Tony Beesley, who secured Sunday’s Fastest Time of the Day in his Jedi Mk4, said: “This was my first visit to Crystal Palace in 40 years and it was full of nostalgia, wonderful camaraderie and a fantastic atmosphere. To be able to compete with such a diverse range of cars in front of such a crowd was fantastic. It will be remembered as one of my best days of motorsport.”