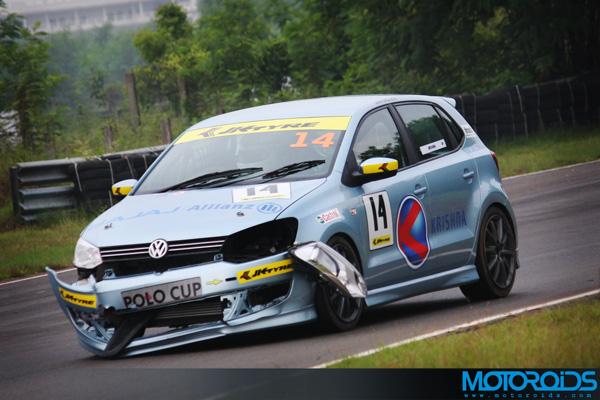 Like we said earlier, the Chennai racetrack is getting busier. The PoloCup proved to be one more reason.

The 4th round of the only one-make race of its kind (for cars) was hosted by the MMSC race track, Irungattukottal, Chennai on 25th-26th September. 2 Days of Adrenaline pumping action was enough for the drivers and the spectators to be thrilled to the core. As you already know, the PoloCup runs with the JK Tyre National Racing Championship, alongside the Formula LGB Swift and Super Saloon categories – and some of the drivers who participated in more than one class, like Polo Cup championship leader Shailesh Bolisetti included, had a tough time switching back from one car to another, from one race suit into another and from one style of driving to another. And as if that wasn’t enough, all of them to had to keep their cool and try their best at find grip as the Almighty decided to shower his blessings in the form of scattered rainfall!

The championship is already very competitive, but now with a few more twists in the tale, it becomes even more interesting. Refer to the current Championship Standings and they will be enough to tell what tale I’m talking about here.