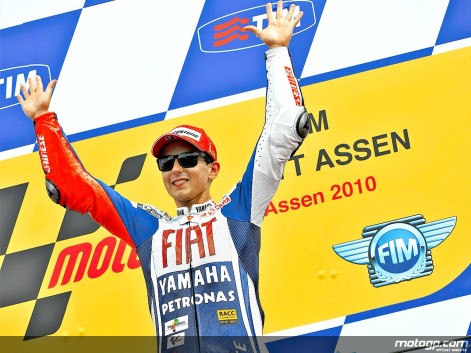 The Cathedral of Gp Racing ASSEN celebrated its 80th anniversary of MotoGP races.The 6th round of 2010 season saw Jorge Lorenzo clinching his 4th victory. Both Yamaha riders Lorenzo and Ben spies got a real good start. Right from the start the Spaniard was looking strong and churning some fastest laps of the race. Spies was following Lorenzo but soon he was caught by Stoner and A. Dovizioso. As the number 99 rider was leading the race, Dani Pedrosa and casey stoner upped their pace and they got engaged in a three way battle. Stoner was determined to finish on the podium as this year the Ducati’s former world champion did not score any top three positions in the first five rounds. They both were riding hard to stay with Lorenzo but he had something else in his mind. Lorenzo got the hammer down on lap 11th and after few laps he was leading the race by 2 seconds over Pedrosa.

By this stage Stoner was looking for a way through on Pedrosa but could not find one, and Lorenzo started to again edge away, extending his advantage little by little as the laps flew by. Further back Spies closed right up on Dovizioso and passed the Italian to move into fourth, and De Puniet was then on the trail as well as the trio remained closely grouped.

At the front Lorenzo, Pedrosa and Stoner got further separated from one another, whilst De Puniet and Dovizioso fought intensely to the last lap but later on the Frenchman experienced a few scary moments as his tyres were sliding all over.

At the back there was a battle going on for 9th position between A. Espargaro and M .Simoncelli.

Towards the end of the race Randy de puniet and A. dovizioso swapped places many times but eventually the itlian rider was able to finsh ahead in 5th spot.

With four wins in bag Lorenzo is leading the championship by 47 points over Dani pedrosa who finshed 2nd in the race.At last Casey stoner finished his race day on podium. The American Ben spies once again shown a great performance as he finshed the race at 4th.