We’ve been closely following the developments associated with the highly anticipated Hyundai ix25 Compact SUV. CLICK HERE to read our earlier post on the upcoming model. Now, a Chinese website has come up with an image of a banner revealing the exterior design of the upcoming Hyundai ix25 Compact SUV. This banner was spotted at the venue of the fast approaching Beijing Auto Show, where Hyundai will unveil this eagerly awaited Ford EcoSport adversary. 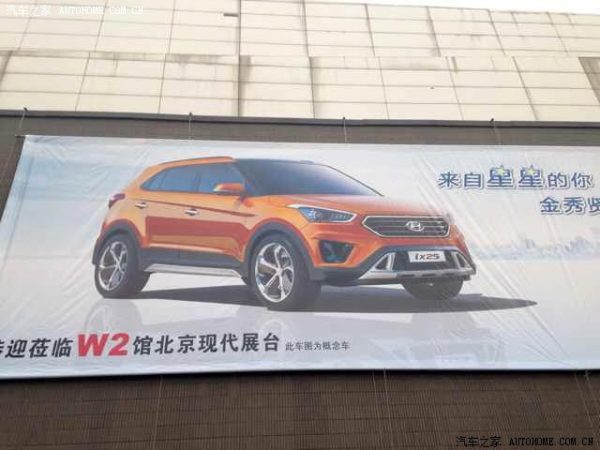 The vehicle that will be showcased at the Beijing Auto Show tomorrow would be a pre-production model that will look much like the final, production spec car. As can be seen in the image of the banner, Hyundai have decided to unveil their Compact SUV in a shade of Orange that is not too different from that of the Ford EcoSport.

In all likelihood, the upcoming Hyundai ix25 will measure 4.25 meters in length, which means it won’t benefit from excise duty benefits that our Government provides to cars measuring less than four metres in length. The Hyundai ix25 will rival the Ford EcoSport, Honda Vezel, Peugeot 2008 and Nissan Juke in international markets.

Stay tuned to Motoroids for more updates on the upcoming Hyundai ix25 interior images and complete coverage of the 2014 Beijing Auto Show.