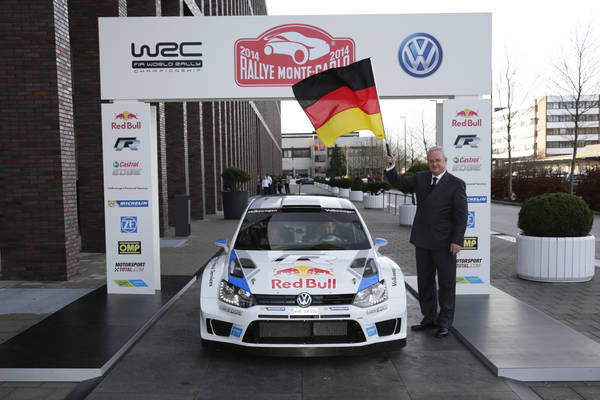 Volkswagen’s mission to successfully defend its titles in the FIA World Rally Championship (WRC) is officially underway. Chairman of the Board of Management of Volkswagen AG, Prof. Dr. Martin Winterkorn, and Volkswagen Board Member for Technical Development, Dr. Heinz-Jakob Neußer, sent the Volkswagen Motorsport team on its way towards the Rally Monte Carlo, which forms the opening leg of the WRC season from 14 to 19 January. In a symbolic gesture, the 315-hp Polo R WRC rolled over the start ramp in front of the main Volkswagen plant in Wolfsburg. Prof. Dr. Winterkorn was there in person to wave the starting flag as the team departed for the first of the World Championship’s 13 rounds on four different continents.

Prof. Dr. Martin Winterkorn,
Chairman of the Board of Management of Volkswagen AG, said.“The entire Volkswagen team performed magnificently in 2013 and won all three titles in the WRC. The key now is to follow on from this success. That means no arrogance or complacency, but maximum concentration and desire to win once again. If the team is able to heed this advice, we could do even better this year. That will obviously not be easy. Winning the titles was a milestone for the Volkswagen brand. Motorsport is not an end in itself for us – we compete to demonstrate the outstanding quality and innovation of our brand and our cars. The Polo R WRC is, after all, based on a production chassis that is manufactured in Pamplona. The fact that we won the championship in such dominant fashion makes the entire Volkswagen brand shine that little bit brighter.”

Dr. Heinz-Jakob Neußer, Volkswagen Board Member for Technical Development, said,”The WRC is a very near to my heart. The Polo R WRC’s first year was simply breath-taking and demonstrated the performance of our products at the very highest level of competition for production-based vehicles. When developing the Polo R WRC, our engineers on the production side worked very closely with the motorsport department. That was not only a good experience for both sides, but was also extremely successful. On the one hand, because the motorsport engineers confronted their colleagues from production development with fascinating questions that do not always come up when developing cars for everyday use. On the other hand, because the production developers were also able to provide solutions that you would not necessarily contemplate in the world of motorsport. The best example of this was the heart of the Polo R WRC – the engine.”

The 2014 World Rally Championship kicks off with the legendary Rally Monte Carlo – and thus with an absolute classic. As defending champion in the Driver and Co-Driver classification for Volkswagen, Sébastien Ogier/Julien Ingrassia (F/F) line up with start number 1. Together with team-mates Jari-Matti Latvala/Miikka Anttila (FIN/FIN, start number 2), they are charged with defending the Manufacturers’ title won by Volkswagen last year. They will be ably assisted by the third works duo of Andreas Mikkelsen/Mikko Markkula (N/FIN) in Polo R WRC #9.