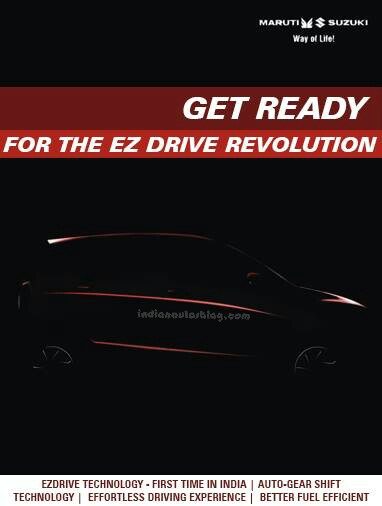 Seen here is the first teaser image ever of the upcoming Maruti Celerio small car. In most markets abroad, the new Celerio will replace the Alto. In India though, the Celerio will be the replacement for both the AStar, which is the current gen Alto, and the Estilo. The Maruti Alto 800, which is based on the earlier gen model, will continue selling in our country.

A couple of days earlier, we got to know that the Celerio will be launched with an automated manual transmission (AMT). (click here to read our earlier story on the Celerio). An AMT system basically does away with the need of using the clutch pedal completely while shifting the gears. AMT systems make driving a lot more hassle free in conditions such as stop-go city traffic and yet, are much  cheaper than the conventional automatic gearboxes. Also, AMT systems help in bestowing the car with higher fuel efficiency than the manual transmissions.  As can be seen in the lead image of this page, the automated manual transmission in the Celerio will be called ‘EZ DRIVE’. It would be interesting to see if the Celerio’s AMT transmission would catch the fancy of small car buyers in India.

As is a known fact, the Maruti Celerio ‘EZ Drive’ will be powered by the same 1 litre, 3 cylinder, K10 petrol engine that powers the AStar, Estilo and the WagonR. This 3 pot motor has a max power of 67PS and has been loved by us for its peppy performance.

The Maruti Celerio EZ Drive will greet us at the upcoming Auto Expo 2014 and would go on sale shortly thereafter. (Click here to read about all the 40 odd cars that will be launched in India in 2014)

Stay tuned to Motoroids for more updates on the upcoming Maruti Celerio.