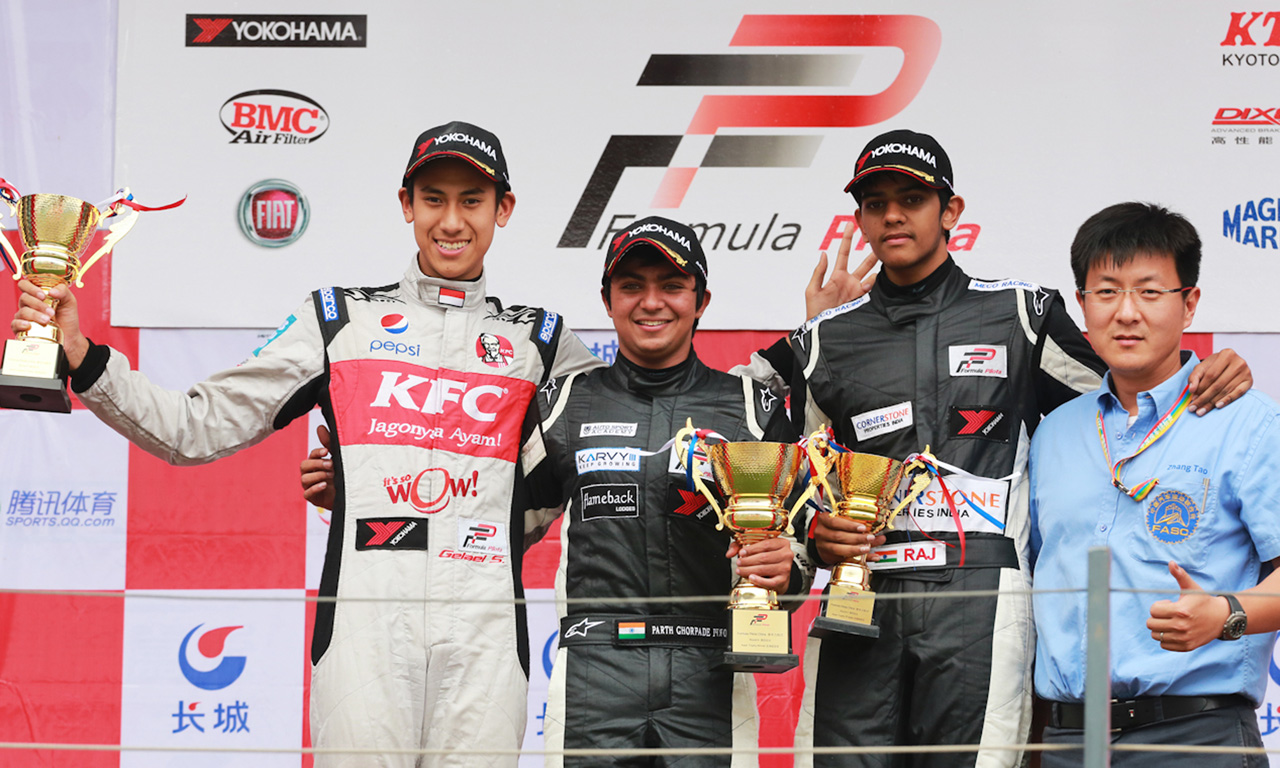 Upcoming Indian racer Parth Ghorpade continued his strong start to the 2012 Formula Pilota Championship with a win and a podium finish in the Asian category at the Ordos International Circuit. With three rounds taking place over the weekend the young Indian driver finished in 1st, 5th and 3rd places respectively. Parth had earlier qualified in 5th position for Races 1 & 3. Race 2 grid is determined by the order of fastest laps set in Race 1. In the overall category Parth had finished in 3rd, 9th and 5th positions respectively.

Parth had restricted running in the practice sessions as his car suffered technical and handling issues which left him more than 2 seconds off the pace of the leaders. Qualifying was a big improvement and he managed to claw back the deficit to less than half a second. In Race 1 Parth had a good start and passed Akash Nandy for the top podium spot in the Asian category. Race 2 was wet and Parth decided to stay out on wet tyres on a drying track which sent him backwards. Race 3 was a dry race which saw Parth finishing in the position he started (3rd in Asian category) after a long battle with Akash Nandy before settling for the points.

Ghorpade was happy with the points he took away from the weekend after suffering many problems in practice. He commented, “I am happy to finish in the points after a very tough start to the weekend. I suffered a broken brake disc in practice which kept me out for most of the day. So we had to spend the qualifying session looking for the ideal balance for the car and a comfortable race setup. I was very happy with my performance in the first race as the car felt really good in the dry and I could push even more. Second race was quite a disaster for us and the conditions were far from ideal. I had absolutely no grip on the wet tyres and struggled to keep up with the other cars for the entire race. For Race 3 it was dry again so I was able to push again. ”

“This has been only my second race weekend but am getting more confident in the car. Without the practice problems I am sure we could have gone a lot faster. I am very happy for the rest of the season so can’t wait to return here next month.”

18 year old Ghorpade is a five-time National Karting Champion, runner-up in the inaugural 2010 Volkswagen Polo Cup India, and recently competed in the Renault F4 series in 2011, finishing in the top five multiple times.