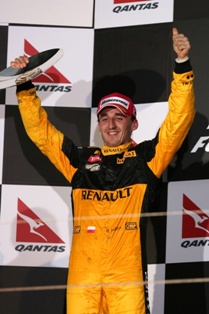 There was only one better way in which Robert Kubica could have erased the memories of his earlier unhappy outings at Melbourne’s Albert Park. But given the machinery he had, this result was probably something that neither him nor anyone at the Renault F1 squad could have dreamed about.

The rain and the safety car period aided Kubica; as did the fact that two front runners in the form of Michael Schumacher and Fernando Alonso literally had to restart the race from the back of the pack after they came together at first corner of the first lap itself. However, nothing can be taken away from the Pole who had to use every ounce of his talent to keep quicker cars such as the McLaren of Hamilton and the Ferrari of Felipe Massa at bay. Starting from ninth position, Kubica made up a few places at the start and steered clear of the melee at the first corner to avoid a repeat of the Bahrain debacle.

He then chose to pit early and changed his rubber to the softer compound as he headed back on track. Some gutsy, skilled driving saw him make up places as others pitted and he was looking set to claim the third spot of the podium by the half-way mark. But, then the mechanical gremlins once again beset Vettel and Kubica was looking at a realistic chance of P2. Then there was an exciting duel between him and Hamilton for the second spot. This was where the Pole really impressed and showed that he can maintain his calm and nerves even under pressure from a really fast car. He made no mistakes whatsoever and a frustrated Hamilton chose to pit again for a fresh set of rubber giving Kubica some respite.

Towards the end, he faced an onslaught from the Scarlet cars; but was determined to hold out and hold out he did! Meanwhile, team-mate and rookie Petrov had a good start and was looking for a decent finish but ended up spinning onto the gravel bed on lap 10. This youngster has the talent; but he needs to fight harder to finish a race; because no matter how talented you are, it’s ultimately the results that count in your favor.

Renault and Kubica can leave Albert Park with their heads held high and a podium place to cherish. But make no mistake; the R30 wasn’t what got them there. It was only the man behind the wheel who made it possible. We might well not see Renault returning to the podium in the next few races; but then again who knows? The last race showed us how quickly things can change and that almost anything is possible. Luckily, the wait ends in 6 days time as we go to Malaysia for round 3 of the 2010 championship.