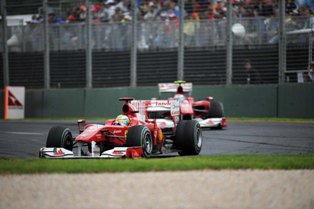 The Australian GP was a humdinger. It had everything fans and audiences worldwide would ask for – great racing, some good overtaking, few spins and crashes. It was one of the best Australian GPs in recent times.

But let us not take solace from this. The sparks in Australia doesn’t necessarily mean that F1 is back to being the spectacle it used to be. The Australian sojourn doesn’t guarantee that we will not have any more borefests.

While the commentators on television tried their best to juice it up and kept reiterating that F1 isn’t boring (and rightfully so as in this case), I feel the Australian GP’s entertainment was coincidental. The no refueling rule also came up for a vehement debate when drivers in the front on older tyres were seen stalling faster drivers on newer tyres. The mere fact that a 2 second per lap quicker Hamilton just couldn’t get past Alonso serves a grim picture of what lies in future.

Ferrari’s witnessed an incredible start to the season. Bahrain was sublime and Australia was also a class act. While a win would have been great but even a 3-4 isn’t bad considering that their qualifying was compromised to a great extent. The F10 once again proved to be the definitive car to be in. The best part seems to be that its pace and handling doesn’t change too much between Saturday and Sunday; something that has been ailing Red Bull and McLaren. This will be the differentiator in shaping the outcome of this year’s Championships.

Alonso would not have dreamt in his wildest of dreams that he would be leading the Driver’s Championship after the first 2 races. Alonso out-qualified Massa by over seven-tenths of a second – the biggest gap between any pair of team mates apart from the Renaults. But his hopes of victory evaporated within seconds of the lights going out. He found himself caught in a duel between the McLaren of Jenson Button on the inside and the Mercedes of Michael Schumacher on the outside. The resulting contact forced a spin and left him facing the counter direction on the track. Luckily for him, nobody hit him and he resumed the race right at the back of the pack.

From last to 4th isn’t bad at all considering that Ferrari might have forced him into not pressurizing Massa for the 3rd place. While his tenacious drive is worth lauding, the highlight here is the F10 package. 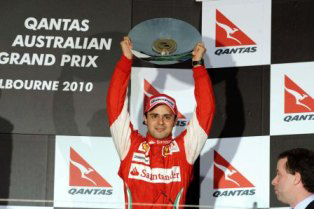 Needlessly to say, Massa too enjoyed his 3rd place from an average 5th on the grid. While he was quite unconvincing overall, this result was more for the car than for the driver. His hesitation in explaining his performance in the race in the post race press conference demonstrated how lucky he felt to be in the room. He was constantly under pressure first from Webber, then Hamilton and in the closing stages by Alonso. Although, to give him some credit, he did maximize his start though.

Ferrari’s team principal Stefano Domenicali was found raving about Alonso. He said, “Fernando staged a fantastic climb through the field and might have got an even better result, but we know overtaking is always difficult, especially when it involves cars with similar performance levels. He was perfect when defending his position against Hamilton in the closing stages.”

Yes, as an F1 fan, it pains to see the sport suffering. But as a tifosi, it is thrilling to witness Ferrari’s consistency. I earnestly hope both the sport and Ferrari emerge as Champions at the end of the season.