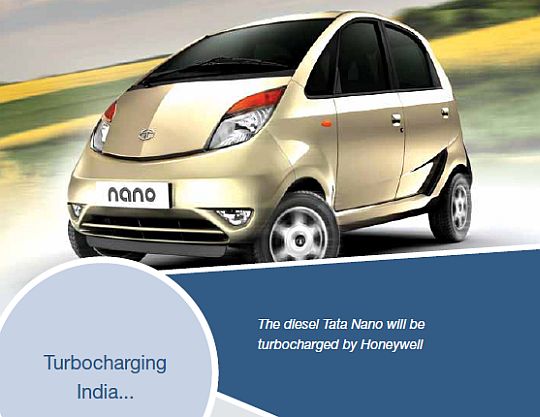 Tata Nano surely loves being in the limelight for one reason or other. Since last few days, news about this little wonder has not ceased to keep pouring in. After reporting in detail about the Jay Leno’s Nano and the CNG variant of this little car, we have some more news about the diesel variant. We have had more than enough spy pics of the car and what we needed were a few concrete technical details. And this is exactly what has surfaced today. While we had earlier received some knowledge from Bosch people about the 800 odd cc engine, we today got to know that the upcoming car will employ a turbocharger from Honeywell. Before going further with this story, allow me to report that Honeywell is a reputed manufacturer of turbo units and products from the component maker are widely used in the car industries all over the world. Honeywell has also stated at another place that Nano Diesel will be introduced with an 800cc motor and like we reported earlier, the fuel economy of this engine should be as high as 40 Kmpl. Anything like this is sure to easily be the ultimate answer to the ‘average kitna hai?’ factor our market is famous for. Come to think of it, the Bajaj Pulsar 220 DTSi that is in use by me hardly touches 40 kmpl. What further makes the deal sweeter is the fact that diesel is almost 33% cheaper to buy than petrol. So basically, you get a car that is cheaper to run than a bike and on doing some basic mathematics, the running cost will turn out to be very close to merely being 1 Rs./ kilometer. The powerplant is a a 700cc and 2 cylinder in configuration and coupled with the 15 liter fuel tank, Nano should a range of about 600 kms.

The diesel variant will also come with a fully functional 5th door, ie.e. a hatchback door and this means the car will have more space for luggage storage. Like spy pics have shown, the car will come with redesigned front and rear bumpers along with a new mounting for the exhaust pipe end-can.