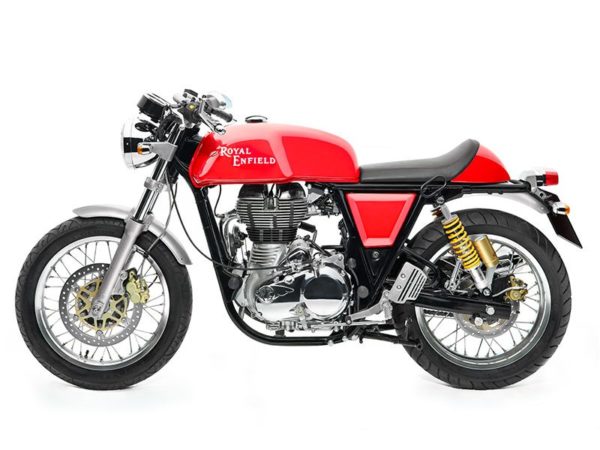 ~ The lightest, fastest and most powerful Royal Enfield in production, the Continental GT has been designed ground-up as the definitive classic sports motorcycle~

Goa, November 26, 2013:  In an era where consumers are increasingly experiencing life through virtual interfaces, Royal Enfield introduces its philosophy of bringing back uncomplicated, approachable, hands-on ‘pure motorcycling’ experience with the all-new Continental GT that brings the core idea of café racing from the 1960s roaring to India. Designed ground up, the Continental GT is a highly responsive and nimble motorcycle with a lot of useable power and torque for the 21st century motorcyclist – one that is outstanding fun to ride at regular road going speeds. Available in the signature GT red and a brand new shade of GT yellow, the bike will retail for Rs. 2, 05,026 lakhs, on-road in Delhi and for Rs. 2, 14, 043 lakhs on-road in Mumbai. 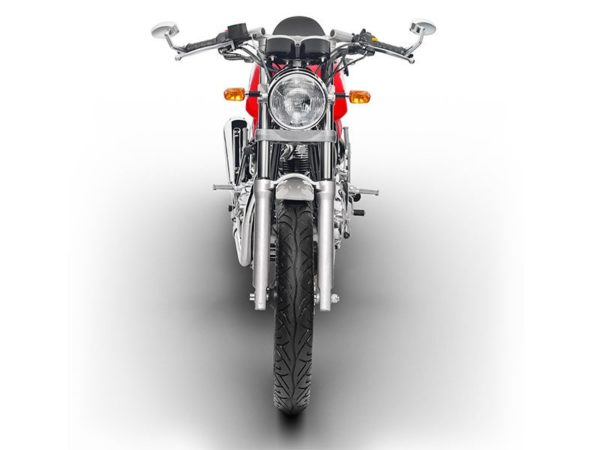 “The Continental GT is inspired by the café racers of the 1960s in its form and simplicity; and it captures the feeling of freedom, fun and responsiveness that riders were trying to achieve then and brings it into the modern context. It is the definitive classic sports motorcycle to have. In the best café racer traditions, the bike is simple and devoid of the excesses that characterise the cruisers and the superbikes of today. At the same time it has been designed ground up, incorporating both traditional craftsmanship and relevant modern techniques at our state-of-the-art new plant in Oragadam to deliver a deeply engaging motorcycling experience that is unlike any other,” said Mr. Siddhartha Lal, Managing Director and CEO, Eicher Motors Limited (the parent company of Royal Enfield).

“In today’s post-performance motorcycling age where power is no longer the most important attribute for an enjoyable ride, design and responsiveness have taken the lead over sheer speed. There is a revival of simpler, evocative and classic bikes that engage the rider. As the world re-awakens to the sound of modern café racers, Royal Enfield is bringing back an icon that introduces the spirit of one of the most popular motorcycling cultures in history with the Continental GT – the lightest, fastest and most powerful Royal Enfield in production”, he further added. 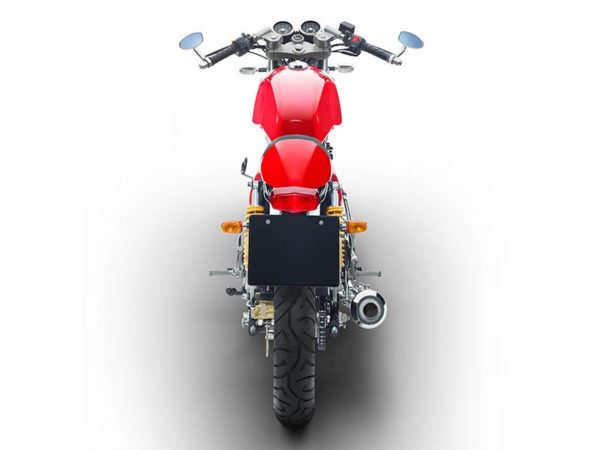 At the heart of the Continental GT is the tried-and-tested single-cylinder air-cooled Unit Construction Engine (UCE) which has been upgraded to 535cc with a re-mapped ECU and lower inertia to deliver that extra punch and responsiveness that is so essential to its café racer character.

Years of chassis development has resulted in a motorcycle that is highly responsive and great fun to ride, thanks to the Continental GT’s razor sharp handling and superior rigidity. Also, the ride is super smooth across most road conditions and the motorcycle responds naturally and instantaneously to the rider’s body. Royal Enfield worked closely with UK-based Harris Performance to create the bike’s new chassis, which delivers this authentic café racer ride and handling via a nimble double cradle frame as well as new 41mm front forks and twin gas-charged Paioli rear shockers. The Pirelli Sport Demon tyres provide excellent grip, and the Brembo brakes give outstanding response and stopping distance to this meticulously designed motorcycle. 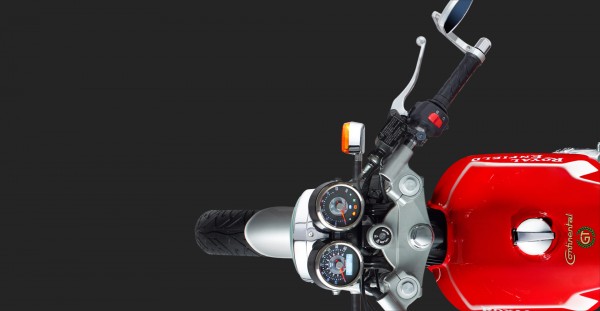 As a result, according to the test riders who put the Continental GT through its paces around various types of roads and at classic tracks such as the Castle Combe Circuit in Wiltshire, the motorcycle remained true to its glorious café racer roots and delivers a thrilling ride. It is built for burn-ups.

Café racers of the 1960s and Royal Enfield’s own 1965 Continental GT – the first mass produced café racer of its time – in particular were the main design inspiration for this motorcycle. It has a stretched out low-profile fuel tank with knee recesses for the authentic period café racer look. Style meets functionality when genuine clip-on bars conspire with the flat sculpted racing seat with contrast stitching and bump stop along with rearset foldable footrests to urge the rider to tuck his elbows in neatly and get into a sporty yet ergonomic position for spirited riding. Trimmed front and rear mudguards add to the clean lines of the Continental GT and an upswept exhaust allow more ground clearance when cornering at speed. Royal Enfield worked closely with Xenophya Design of UK to get the overall look and proportions just right and to ensure that each detail on this motorcycle is well crafted so that it will become a modern classic in its own right. 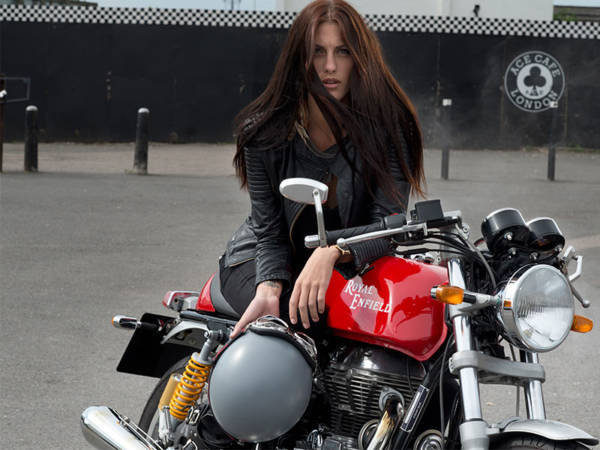 “The involving new Continental GT evokes a sense of nostalgia and aims to revive the mood of romantic and free spirited optimism of the swinging ‘60s. It is built to be a motorcycle that insists on being ridden frequently,” said Mr. Lal. “It is a no-nonsense bike that is easy to maintain and own, and one that turns heads without exception. Novices and veteran riders will appreciate the complete control of this bike; the experience of the Continental GT is pure motorcycling at its best, much like in the heydays of café racing,” he added.

Café racing as a culture evolved during the 1960s and involved motorcycle enthusiasts using stripped down, customised, fast motorcycles to race between transport cafes. These sporty, souped- up motorcycles gave birth to the café racer genre. Light, powerful and fast, low set handlebars and rear set footpegs lending to a crouched down riding posture were the hallmarks of these café racers. They were also simple machines that could be customised easily to make them more responsive and quicker.

Complementing the Continental GT is a range of ‘Burn-up Wear’ – well-crafted, meticulously-detailed, purpose built motorcycling clothing and accessories. This line has been crafted from Royal Enfield rider experiences, in collaboration with veterans of riding apparel. The detailing is a nod to classic motorcycling clothing. Each article has heritage you can see and performance that you can’t do without. 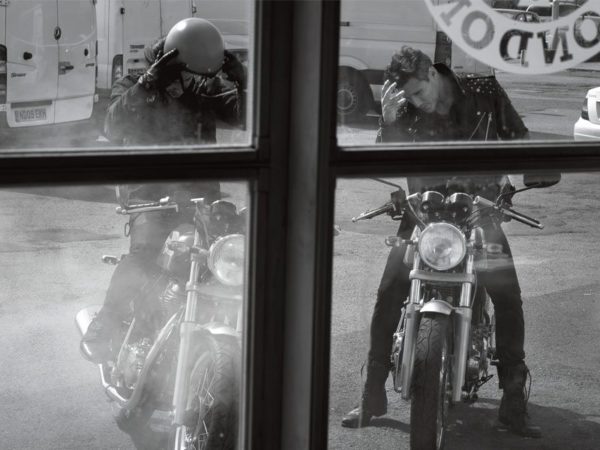 Leading the pack is a textile riding jacket with CE approved removable protectors, high visibility reflective piping, removable winter liners and ventilation. Additionally, the GT Brando Leather Jacket is inspired by heritage styling but with thoughtful and helpful features for present day riders. There is also a special edition co-branded leather jacket designed by the iconic Lewis Leathers based on their Lightning series. Durability, safety and comfort are the hallmark of our half-face AGV helmets featuring stunning Royal Enfield vintage graphics and insignia. Bringing up the rear are Ton-up T-shirts, Continental GT T-shirts and pit shirts that are high on style but low on maintenance. 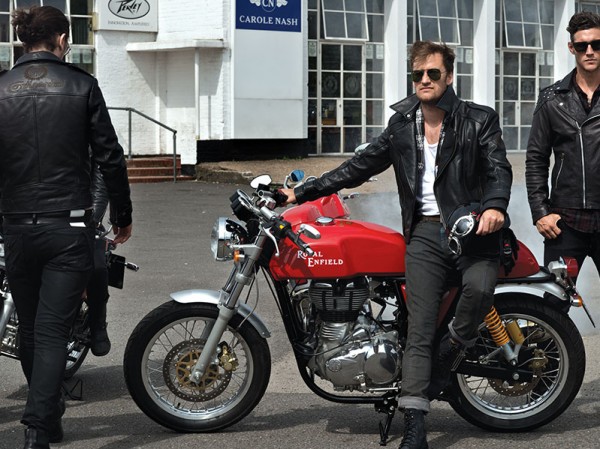 The Continental GT is a global product from Royal Enfield that adds a new segment in mid-size motorcycling.
“Aptly timed, the Continental GT is an important catalyst in realising our ambition of achieving global leadership in the mid-size motorcycle market. We believe there is an interesting space for our kind of motorcycling with bikes that are holistic in their approach, and are great fun to ride in cities and beyond the urban landscape as well”, Mr Lal said.

The 2013 Continental GT is a machine with a story, a nod to motorcycling’s finest hour and the best expression of a cultural phenomenon that has simply refused to fade away – the café racer.