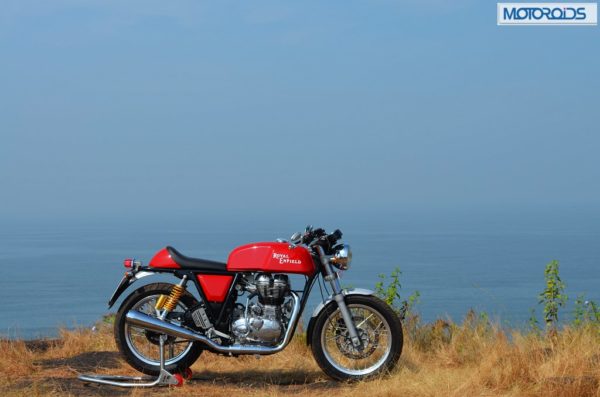 The hotly anticipated Royal Enfield Continental GT will be launched a few hours later today and we are just back from spending almost half a day with the new kid on the block with a quick review of the bike.

The new Cafe Racer styled Royal Enfield Continental GT has generated a lot of interest among bike aficionados and RE followers and here we have answers to most of the questions we have been bombarded with. 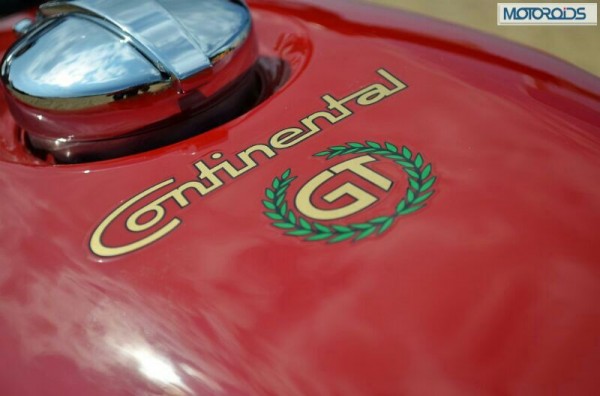 What’s with the all new styling? It looks so unlike a ‘Bull’. . no?

As we have been saying, the new Royal Enfield Continental GT boasts of typical cafe racer styling and pays tribute to the much loved machines of the yore. Basically, the Continental GT is a modern day re-incarnation of the first cafe racer styled Royal Enfield, which came way back in the ‘60s. Back then, the Continental boasted of a 250cc motor and was quick to make a name for itself for being the quickest street legal quarter litre bike around. 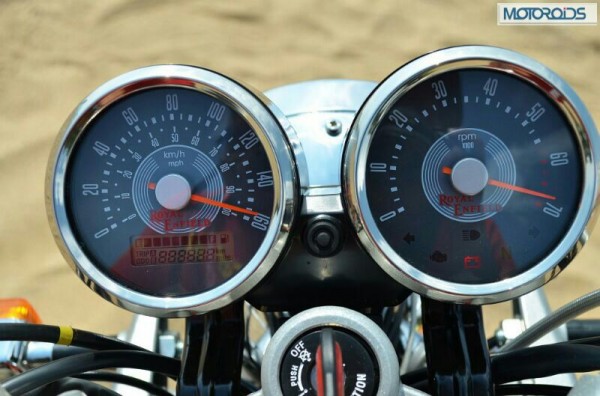 Whoa! That sounds great but haven’t the ergonomics gone for a toss?

Well, the old school RE lovers may find the sporty seating of the Continental GT a tad difficult to adjust to, but the ergonomics are nothing worth a worry, really! The new Royal Enfield Continental GT does offer a seating posture that is very unlike a RE but we never felt a need to complain about the ‘more dedicated’ riding position. The new RE Conti GT comes equipped with clip ons and slightly rear set foot-pegs. While the bike is no Yamaha R15 in this aspect, the riding posture surely has more than a hint of sportiness to itself. The rider has to stoop a little to grip the handlebars, which along with the positioning of the footpegs, warrants him to have a fairly sporty riding posture. Nothing wrong here, especially if you consider that the Conti GT is built to travel at a rapid pace and bestow its rider with tonnes of riding pleasure. 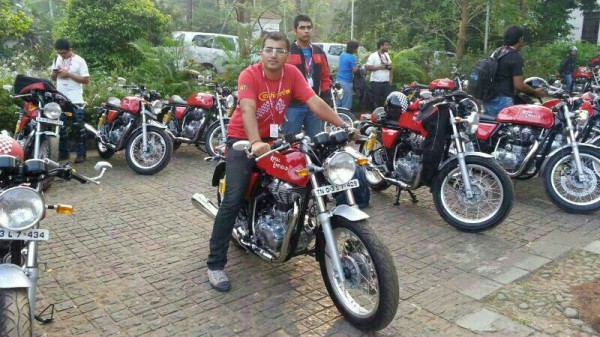 Gremlins would include the distance between the toe shifter and the footpeg. It is a tad on the lesser side (believe you me, am no bigfoot) and the frontal heaT shield on the exhaust pipe too was found to be short enough to let me rub my leg against the hot metal (and in process, spoil my old blue jeans!).

Okay! What about all the hoopla about the motor? 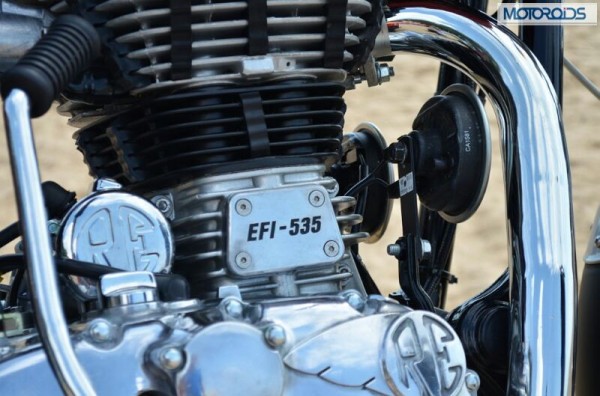 The new Royal Enfield Continental GT is powered by a 535cc, fuel injected, air cooled, single cylinder motor that has a max power of 29 bhp and peak torque of 44 Nm. That’s definitely a lot of torque there and while RE didn’t develop the Conti GT’s motor from grounds up, it has done a fairly decent job with equipping its new baby with a fairly decent engine.

Sounds good on paper but is it as good in real world? 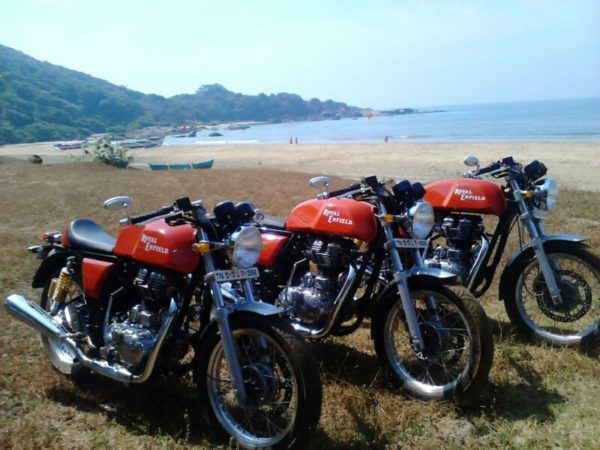 Why yes! The new RE Conti GT has to be the most exciting, and the most promising RE we have ever ridden! The new bike, endowed with the 535 EFI engine, is more than capable of cruising at 100kmph and such is the outright performance of this bike that hitting 120 kmph on the speedo takes hardly any effort. While the ghats in and around Goa didn’t allow us to flat out, we reckon that the bike is potent enough to hit a speedo indicated 140+ kmph.

Marvelous, but what about the ride-ability?

Glad you asked! The new Royal Enfield Conti GT should impress you with the ride-ability. As we have been saying, the torque on offer is in abundance and thanks to well selected gear ratios, the bike impressed us with the way it can pull away easily from really low speeds, in high gears. For instance, we did manage to chug along at approx 35 kmph in fourth gear, of course, without stalling the bike even once! Impressive, no? 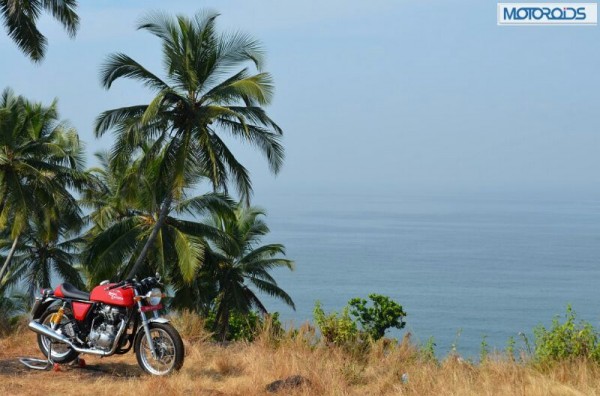 Hmmm. . . I wonder if it has the handling prowess to match its sporty aspirations . .

If you compare it to the rest of the REs, it definitely does! The new bike is built around an all new chassis, which is around 10 kgs lighter than that of the TBTS 500. The new chassis is competent enough to bestow the Continental GT with decent road handling manners and while we never went knee scrapping on the new bike, we did find ourselves carrying decent speeds in the corners. The Continental GT, even with that lighter chassis and all that jazz, is a heavy bike and we believe that in some cases, weight does help! What we mean to say here is that all the mass translates into good straight line stability and overall, we dare say that the new Royal Enfield Continental GT is easily the best handling bike to have come from the good chaps at RE. 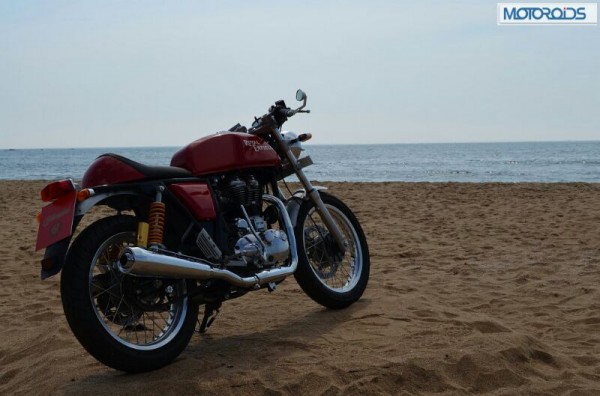 Well, what about the ride quality?

Royal Enfield have always been associated with long distance touring and while the Cafe Racer is no bike to get Leh’d with (we recommend the TBTS here), the new bike is sufficiently comfortable over long rides and varied terrains. For the old style RE lovers, riding this bike will take some getting used to as there is more pressure on your wrists and shoulders as compared to the rest of the REs. We certainly have no intentions of associating words like plush with the GT’s ride quality but on the same time, the bike ain’t no back-breaker either. 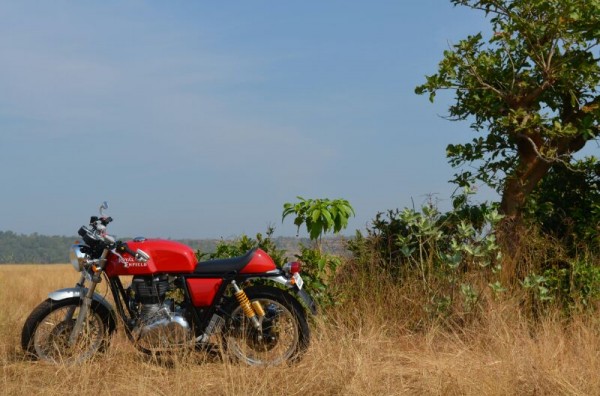 What are your views on the build quality and finish?

Well, the RE Conti GT does feel like it has been well put together and wouldn’t trouble the owner with build-quality related issues. Right from the switchgear to the body panels, we were really hard pressed to find issues with the built quality and feel that the new bike won’t really trouble its rider with niggling issues that are quite common with some of the old school bulls.

Without beating around the bush, we would like to state that the all new Royal Enfield Continental GT is definitely an interesting new product which will have global appeal thanks to its maker’s heritage credentials and its own chic styling! Not just the new bike successfully pays homage to the Cafe Racers of a bygone era, it also opens gates to an all new segment of stylish heavy bikes in India. In doing so, it also paves way for future REs with a sporty character and we really won’t be surprised if RE manages to spawn a few more models based off this brand new platform.

PS: These are just first impressions. A more detailed review will be posted very soon