It is official! The new 2014 Honda City will have its first public outing in an event in India on November 25. The invite for the 2014 City reads: “The global unveiling of an iconic model which has redefined automotive design and technology”. 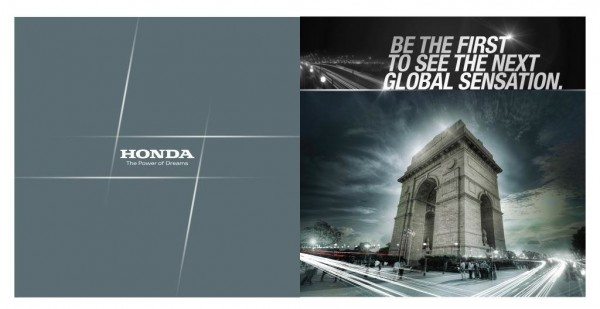 It is being said that several Honda Cars dealers across the country have already started accepting booking for the upcoming car. Deliveries of the 2014 Honda City are likely to commence around mid Jan 2014.

We believe that the 2014 Honda CIty might very well re-vitalize the sales performance of the Honda Cars India in the C segment of our car market.

Worth a mention here is that until some years ago, the City used to be among the most formidable contenders in the upper C segment and has played a vital role in enabling its manufacturer to establish a strong foothold in our country. However, thanks to Indian car market’s fast growing affinity for cars with diesel engines, sales of Honda City, which doesn’t have a diesel engine variant, have taken a big hit. It won’t be an overstatement to say that the lack of a diesel engine variant has played a huge role in making the City a dud seller. While Honda Cars India did come up with a new 1.5 litre iDTEC diesel engine recently, shoe-horning it into the City, which is several years old now, would have translated into a feasibility study gone really wrong. However, all this would change with the advent of the next gen 2014 Honda City.

The 2014 Honda City will not just come with a diesel engine option but would also be half a shoe size larger than the current model. As is pretty obvious, the car would be based on the new gen Jazz and this means that it is also likely to have a longer features list. The diesel motor that would power the new City is the same oil burner that powers the Amaze. However, we expect that the motor would get a Variable Geometry Turbocharger and hence, would have at least 118PS of max power. Also, it is likely to have around 225Nm of peak torque.

Aesthetically, the car would carry many design cues that are seen on the latest gen Jazz. Also, the car could take some design inspiration from the new Crider sedan.

Going by all that we know about the upcoming 2014 Honda City, we won’t be too surprised to see it becoming a game changer of sorts when it is launched early next year.