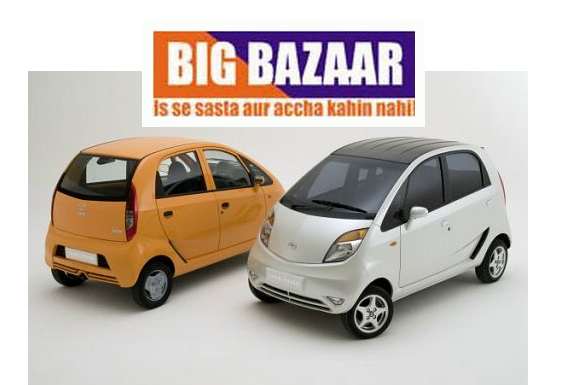 For us, this makes perfect sense. The guy who gives more up market superstores like D-Mart, Haiko and Hyper City a miss to go to Big Bazaar is definitely looking for value. And no other car in the Indian car market represents more value than the Nano. The regulars at Big Bazaar more often than not are the kind of customers who are willing to overlook quality in consumables such as clothes, food items and toiletries to an extent if it gets them a good deal. And what better deal could they get on a car than the Nano, with its incomparably low price and goodies such as gold coins and gift vouchers thrown in! In a nutshell, the customer visiting Big Bazaar is bang on the target group that Tata Motors want to aim at.

And that’s exactly the reason why India’s largest vehicle manufacturer has partnered with the Future Group retail chain to sell the Tata Nano in the latter’s 120 stores across the country. And if the numbers are something to go by, it seems like this one of its kind alliance is working for both the companies. Tata Motors has already sold around 450 Nano cars through Big Bazaar initiative. And it’s been just a little over a month since the alliance took off, on February 4th. Those numbers comprise 5% of the total 8,262 Nano cars sold last month in India.

According to the President of Customer Strategy for Future Group, the new marketing strategy has met the expectations of both Tata Motors as well as Future Group. Both the companies are now planning to extend the partnership to another 3 months over the initial tenure of 3 months.

Tata Motors have shown great ingenuity in marketing the Nano after the first hiccups. Extended warranties, touch points in rural areas, low interest loans, and now an India-first strategy to retail a car through a superstore. The marketing managers (if not the engineers) at Tata Motors really have our respect. What’s your take on this?