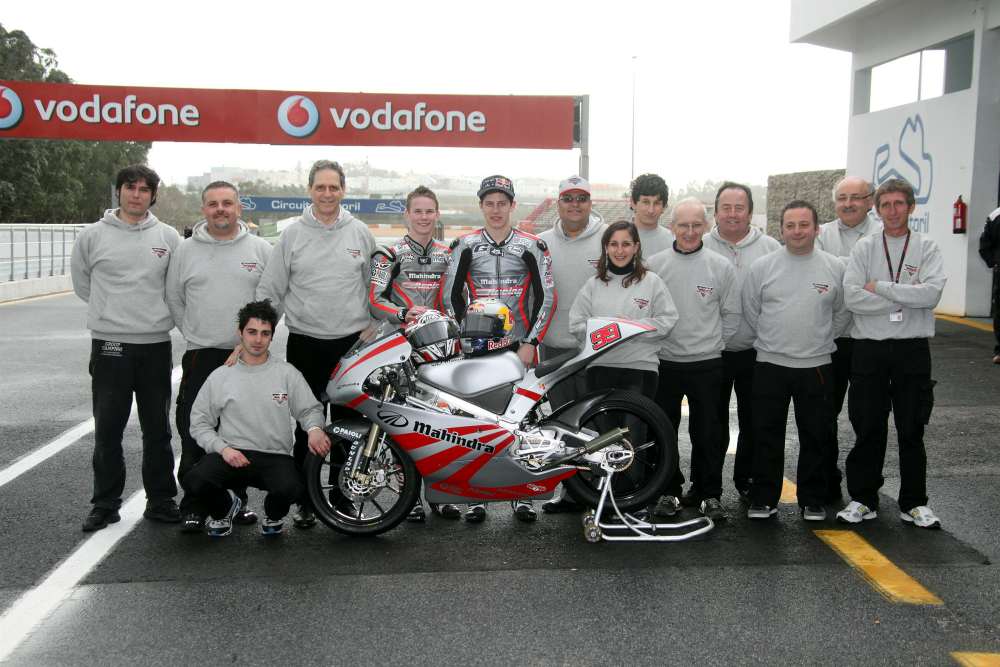 Produced by Mahindra’s Italy-based Engines Engineering division, the GP125 will be ridden by riders Danny Webb from Britain and Marcel Schrötter from Germany.

Qatar is likely to present a tough debut venue. Its desert location means sand is often blown on to the track, making finding a good bike set-up difficult on the constantly changing surface. It is also the season’s only night race, held under floodlights, giving added difficulties to the riders.

Team Principal Mufaddal Choonia heralds the team’s debut. “I am very proud to be part of the first Indian team in MotoGP racing. This is a big challenge for everyone involved and we are all working very hard to ensure we are competitive.

“Ultimately, we are not in the sport to make up the numbers, we are here to win. That might sound ambitious, but that’s the way we are. I know that this is a big task, but we are all focused and we are in the battle for the long term” said Choonia.

Speaking about Mahindra’s participation in the MotoGP Championships, Mr. Anand Mahindra, Vice-Chairman and Managing Director, Mahindra Group, said, “It is a matter of great pride for us to represent India in the world’s most prestigious two-wheeled race series. Mahindra Motorcycles will compete with the best in class, and it will be an ideal opportunity for us to showcase our strengths in the engineering and IT domains. MotoGP is the ultimate test for the finest talents in motorcycle racing and an immensely popular championship with a cult following. Our participation will also help us leverage the power of global branding for the Mahindra Group.”

Leading Mahindra’s charge is 19-year-old Danny Webb from Tunbridge Wells, England, who starts his fifth season in the category.

“I think my experience and potential attracted the team to me, and the strength and back-up of the Mahindra Group combined with the expertise at Engines Engineering drew me to them. Qatar’s our first race together and we’re focused on improving steadily through the season.

“I like the Qatar track but racing at night is an usual challenge. It’s a bit like being in a Playstation game, and you have to learn to ignore the shadows from the riders behind you as the floodlights makes it look like they are riding into you all the time. I’m confident we’ll do a good job.”

Eighteen year-old Marcel Schrötter from Pflugdorf, Germany, is entering his second season in the category. “I’m looking forward to Qatar and it will be great to be racing again. I am still learning the GP125, and the bike is still being developed so it is difficult to know how well we will go in our first race but I will be pushing hard all the way.”
Watching over activities during the four days action in Qatar is team manager, Nicola Casadei. “It is fair to say that testing was not as straight-forward as we hoped as we were interrupted by a lot of rain, but we have a good understanding of the bike. We know our strengths and we know where we have to improve. Qatar will give us a good gauge of where we sit relative to our rivals.”

The Grand Prix of Qatar opens with practice sessions for the 125cc class on March 17-18, followed by qualifying on March 19 and the race on March 20.