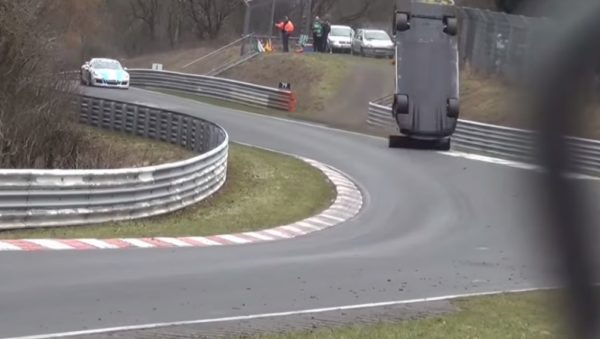 A Nissan GT-R Nismo lost control and crashed at the fabled Nürburgring track in Germany, killing one spectator and injuring more in the process. The GT-R, driven by Jann Mardenborough flipped off the at the Flugplatz section of the track, and into the spectator area at this weekend’s VLN endurance race. Mardenborough survived without serious injuries. Incidentally, he is currently scheduled as one of the drivers who will contest the 24 Hours of Le Mans in the GT-R LM Nismo.

In a statement, Nismo says it is fully cooperating with race organizers, and at this time, the cause of the crash is not known. The spectator died despite immediately initiated rescue operations in the Medical Center of the circuit. The other injured spectators were taken for further medical care to the hospital. The race was stopped to allow quick access to the scene and hasn’t been restarted yet.

Watch the footage of the crash here: