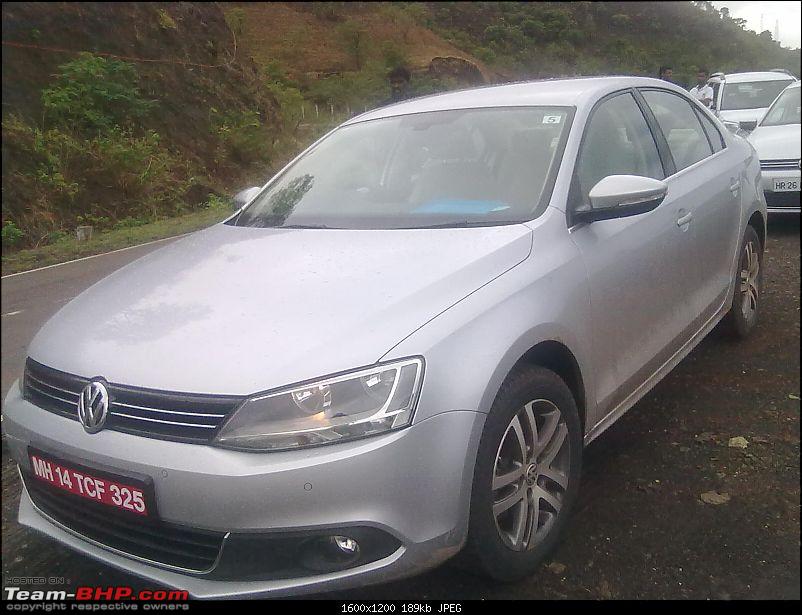 VW has been readying its new Jetta for India for some time. The current gen model, although well equipped and well engineered, doesn’t quite look premium enough to compete with the rivals in its segment. Skoda Laura, which is VW Group’s own product, looks like a better deal for the price. All that, however, is soon going to change with VW introducing the new Jetta. The new version of the car looks much better than the current one, and will probably be better equipped too.

Team-bhp member Amar Paithankar has managed to spot the new Jetta testing in India, at the picturesque twisties of Lavasa near Pune. The car was powered by a 2.0-liter TDI engine, the same unit that propels the Skoda Laura / Superb, and produces 142PS @4200rpm, and peak torque of 320Nm @1750rpm. We are sure this is not the same unit as the Passat Bluemotion TDI producing 170 horses, as putting the more advanced unit in this baby would escalate the cost for no understandable reason.

The new Jetta shares its face and flanks with most other VW cars like the Polo, Vento and Jetta. While having a family design philosophy is a good thing, VW seems to have taken it way too seriously. Cars need to have a personality, some character, unfortunately, VW new family design philosophy is making all the cars from the stable look alike from the front. The only differentiating factor is proportions, for most models. The Jetta too resembles the Vento, Passat and Polo from the front, and only a keen observation would reveal the differences.

The Jetta is larger in proportions than the Jetta. Then there are the stylish 10-spoke alloy wheels which are unique for this particular version. Finally, you have the biggest giveaway at the rear, the tail-lamps, which are unlike any other VW model in India, and are reminiscent of the Audi A4’s tail units. The twin-pipe exhaust is another detail you should look out for, for differentiating the Jetta from its blood brothers.

Features include parking sensors, which were clearly visible on the test mule. There is no question that the car will come equipped with dual-clutch DSG gearbox, and will retail at a higher price than its Skoda cousin when launched. Expect a pre-Diwali launch by VW.