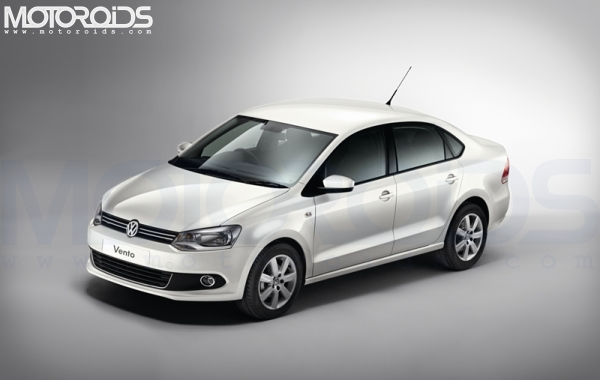 In our earlier post, we reported Volkswagen testing the new Jetta around Pune. Amar Paithankar, the guy who took the pictures, is also reporting that VW was testing a few other cars too along with the new Jetta. The most intriguing of these cars was a 1.4-liter petrol version of the Vento. Now, we cannot expect VW to be testing an entirely new variant of a car just for fun, can we?

The new 1.4-liter petrol variant of the Vento seems to be prepared to fend off the fresh challenge thrown by the Hyundai Verna. Also, petrol prices are soaring through the roof and people are increasingly putting their money on diesel variants of various models unless there is an extremely substantial price difference between the petrol and diesel variants.

The cheapest Vento currently retails for about Rs 7.1 lakh ex-showroom. It’s the 1.6-liter petrol Trendline version. With the Vento 1.4 liter petrol Trendline variant, VW may be able to offer a further discount of Rs 50K, which would give the prospective customers an even bigger incentive to go in for the car.

The specifications of the new engine are not disclosed yet, but we can expect peak output of around 85PS, with 130Nm or thereabouts of peak torque. While those figures may not sound enough to haul the heavy weight of the Vento reassuringly enough, the lure of being able to own a premium sedan like the Vento at a small price, may just rope some more customers in for VW.

Apart from the new Vento, Amar also reports having spotted a Skoda Yeti and a Skoda Superb with concealed badges on test. While the Yeti on test may be an AT version, we cannot fathom what changes the superb may incorporate.