New-vehicle owners in India want features and technologies that aid in driving convenience and visibility and safety, according to the J.D. Power Asia Pacific 2014 India Automotive Performance, Execution and Layout (APEAL) StudySM released today. The India APEAL Study, now in its 16th year, serves as the industry benchmark for new-vehicle appeal. The APEAL Study, which examines how gratifying a new vehicle is to own and drive, is used extensively by manufacturers worldwide to help them design and develop more appealing vehicles and by consumers to help them in their purchase decisions.

The study measures satisfaction across 10 performance categories: vehicle exterior; vehicle interior; storage and space; audio/ entertainment/ navigation; seats; heating, ventilation and air conditioning (HVAC); driving dynamics; engine/ transmission; visibility and driving safety; and fuel economy. Overall APEAL performance is reported as an index score based on a 1,000-point scale, with a higher score indicating higher satisfaction. Visibility and driving safety is the most influential performance category on new-vehicle customer satisfaction in the small car market, contributing 16 percent to the overall APEAL score, and is the third-most impactful category in the midsize segment, where it contributes 13 percent to overall satisfaction.

“The rapid and substantial increase in demand for safety features by vehicle buyers in India over the last few years underscores the need for automakers to develop innovative and cost-effective solutions to address customer expectations,” said Mohit Arora, executive director at J.D. Power Asia Pacific, Singapore.  “While India shows interest in some of these basic safety features, globally, there is a growing interest in a variety of more advanced vehicle safety features. In developed markets, such as the U.S., we are seeing a rising demand for emerging safety technologies such as low speed collision avoidance systems and fully autonomous parking systems.”

“According to the study data, new-vehicle owners spend nearly 2 hours commuting each day, on average, which is almost a 15 percent increase from 2011. With the addition of more than 2.5 million passenger vehicles to the roads in India in 2013, average commute time is expected to further increase, supporting customers’ demand for technologies and features that make the overall driving experience safer and less strenuous,” said Arora.

The Brio, i10 and Innova also rank highest in their respective segments in the J.D. Power Asia Pacific 2014 India Initial Quality StudySM (IQS).

The 2014 India APEAL Study is based on responses from 8,422 owners who purchased a new vehicle between November 2013 and July 2014. The study was fielded between May and September 2014 in 30 cities across India. 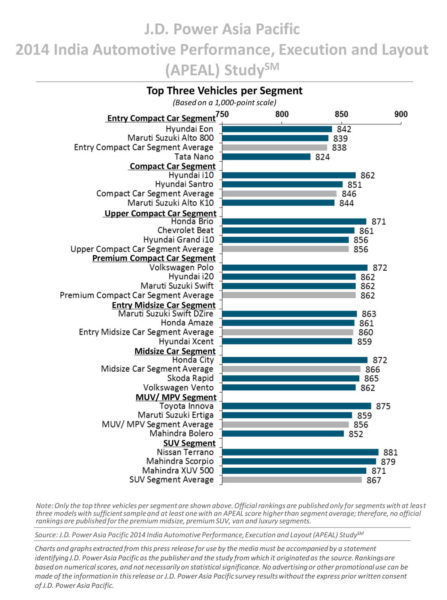