Motorcycle manufacturers are constantly developing technologies to make sure riders are safer behind the handlebar. We already have safety tech such as ABS, Cornering ABS, Traction Control, Wheelie Control, and Rear Wheel Lift-Up Mitigation on many high performance motorcycle. Recently, Ducati announced it’s new front and rear radar safety system which is aimed to prevent possible collisions with obstacles or other vehicles by alerting the rider. KTM, too is working on a similar system and we should see the new safety net arrive sometime in 2020. 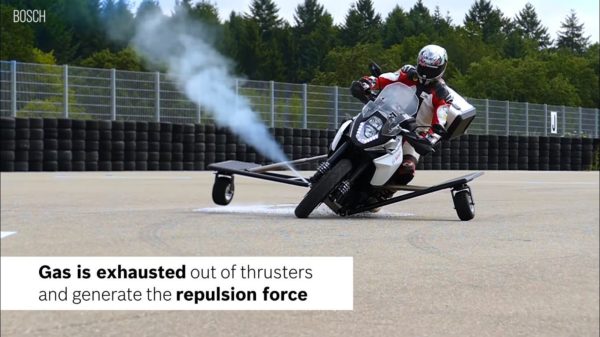 German multinational engineering and electronics company, Bosch plans to make your life safer by introducing a technology from spacecrafts to your motorcycle. The technology is beyond concept and is currently being tested by Bosch. Check out the new tech in action on a KTM 1090 Adventure in the video below:

So what happened? As seen in the video, the rider loses control over gravel, as he’e leaned into a corner. The obvious outcome of the scenario is a low-side crash and that’s when the Bosch’s safety net comes to your rescue. The Bosch slide mitigation system releases pressurized gas as external lateral force to stop you from crashing. However, just like an Airbag in the car, it’s a one-time use device which will need a replacement to save your rear again.