The Indian subsidiary of Renault recently launched a new special edition of the Pulse hatchback. Christened as the Voyage Edition, details of the new vehicle were found on the company’s official website and here we have put all the details together to give you a fair understanding of the new model. 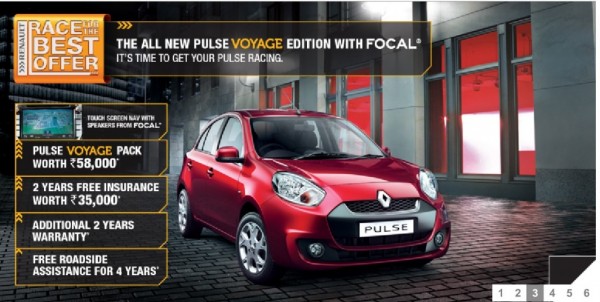 Visually, the Pulse Voyage remains unchanged on the outside and comes with exactly the same paint options that are being offered with the regular variant. Inside is where most of the changes can be found. The Renault Pulse Voyage comes with a touchscreen multimedia system that also doubles up as a navigation system. The car also gets audio components from FOCAL. The car also gets a bespoke Pulse Voyage accessory pack, which is worth INR 58,000, will be offered with the car.

Along with the longer features list, the Pulse Voyage also gets free insurance for two years, two year extended warranty and roadside assistance for four years.

Stay tuned to Motoroids for Renault Pulse Voyage and other details.