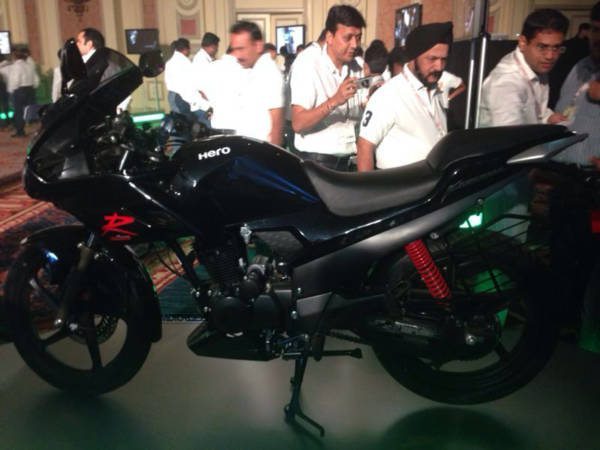 From whatever we can make out from this single image above, the new Hero Karizma R 2013 would come with the same twin projector headlamp setup that is found on the new Karizma ZMR 2013. This is definitely a good thing, considering that arch rival Bajaj Pulsar 220 has won a lot of appreciation for its powerful projector headlamps. The new ZMA-R’s fairing seems to be a “quarter-variant” of the new ZMR’s fairing and would house the same large trafficators that can be seen on the new ZMR. Also, unlike the last gen ZMA, the new bike gets fairing mounted ORVMs. The bike also gets new “R Premium Sports” decals for the fairing.

The new Karizma R will share its rakish tail end with the new ZMR. This means that the new ZMA would come with split seats and will have a pair of split grab-rails (finally!). The Yamaha R15 V2.0 like rear registration plate bracket too will be shared with the new ZMR.

Looking at the engine bay, it can be clearly seen that the motor won’t be an FI unit (what else is the fuel-knob doing over there?). Also, the engine seems to be the same old unit and we reckon that the only new bit about it would be the slightly increased power output. Definitely a bummer, considering that we all were hoping for a 22bhp-plus output.

The suspension and wheels too have been carried over from the earlier model. Ditto for the fuel tank, disc brakes and the foot-peg positioning. However, the fact that the new ZMA-R comes with a new engine cowl, and much more importantly, an O-Ring chain and clip-ons is pretty laudable.

As we have been saying, both the new ZMR and the new Karizma R are a part of Hero Motocorp’s strategy to cash in on the festive season that is about to commence.

However, it would be interesting to see how well is the new Hero Karizma R 2013, which isn’t as comprehensively updated as we all were hoping it would be, received by the bike aficionados of our country.