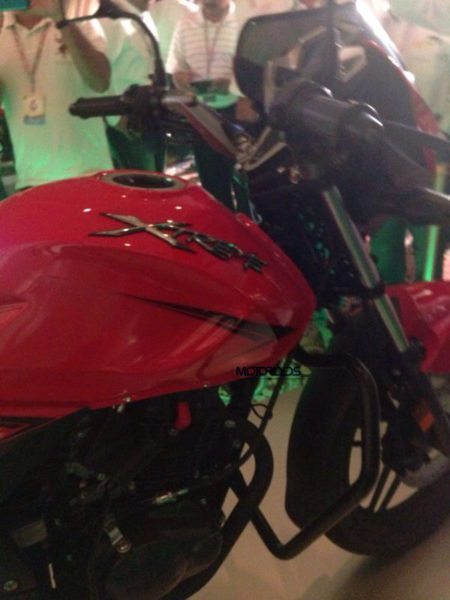 From whatever we can make out from this single image above, the new Hero Xtreme facelift would come with revised tank and many new panels. The bikini fairing is said to have lost the indicators and the bike gets new panels for the rear. The bike also gets a revised instrument console and new 3-D logos.

However, the bike seems to sport the same alloy wheels and disc brake that are found in the pre-facelift model. Going by the Karizma facelifts, the suspension too is highly likely to be carried over from the earlier model, which means that the bike would get conventional front forks at front and gas charged twin shock absorbers at rear.

Powering the Hero Honda Xtreme is a 150cc, single cylinder, air cooled engine that powers many other bikes in this segment. Currently, this engine produces a max power of 14.4 bhp and peak torque of 12.2 Nm for the Exteme but we won’t be too surprised to see this engine developing marginally more power for the facelifted model.

As we have been saying, both the new Karizmas and the new Xtreme are a part of Hero Motocorp’s strategy to cash in on the increased sales during the festive season, during which it would be introducing 15 new models. Majority of  these would be launched between the months of October to December 2013. Hopefully we should see the new Karizmas and the new Xtreme hitting the dealerships before Diwali this year.