Regulars here would remember that we reported when Audi India, during the launch of the 2013 Audi RS5 Coupe in Mumbai, revealed that the Audi S6 4.0 TFSI Quattro, which is the performance variant of the A6 luxury sedan, would be ‘soon’ launched in India.

Now, Audi India’s facebook page has announced that the car will be launched on 12th this month. Also, Audi India has started using the trend #TheNextAudi and some teaser graphics to promote the car’s launch.

The upcoming Audi S6 4.0 TFSI Quattro will come via CBU route and hence, the car would have a stratospheric price tag.

In India, the S6 will join the Audi S4, the performance variant of the A4 sedan. The S4 has won a lot of appreciation from us back when we tested it.

Click here to go to Audi S4 Review by us

The upcoming Audi S6 4.0 TFSI Quattro will be powered by a 4.0 litre V8 TFSI petrol engine that has 420bhp of max power on tap. The motor has a max torque figure of 550Nm and the S6 can hit 100kmph from standstill in supercar-challenging 4.8 seconds.

The car’s engine comes equipped with “Cylinder On Demand” technology that deactivates four of the eight cylinders under low load conditions. The engine comes mated to a 7-speed S Tronic DSG transmission that transfers the power to all four wheels through the Quatto all-wheel drive system. 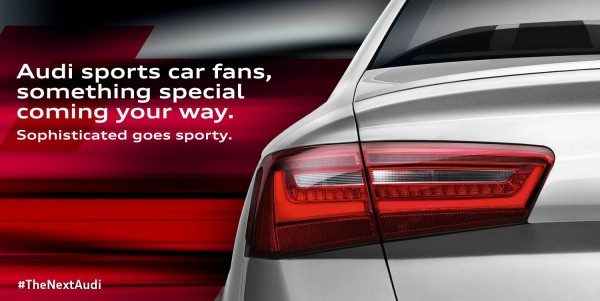 The list of optional extras on the car includes a sport differential, 20 inch wheels and carbon ceramic disc brakes.

Talking about the standard features, the car comes fitted with Audi Drive Select system that allows you to control the throttle response, shift points and suspension settings.

We really can’t wait to take the Audi S6 4.0 TFSI Quattro out for a drive on the twisties!

Go to next page for Audi S6 Image gallery