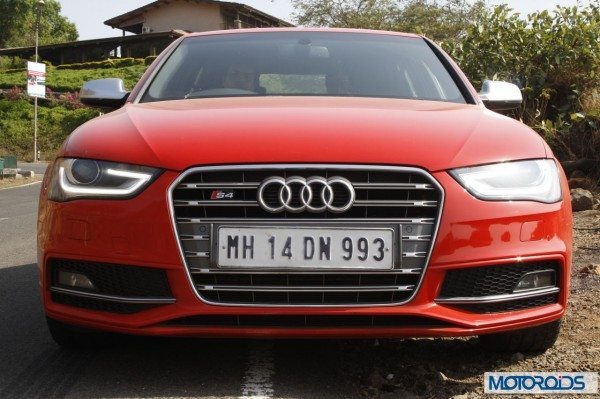 Audi S4’s unassuming demeanor provides you the perfect tool to silently snuff out the oblivious posers. Trust this deadly Ice dagger to leave no evidence after the slaughter.

God had a smug expression on his face when he created humans. He knew he had made something special. So after having created us and having looked after the proceedings thereafter for a few thousand centuries he got a little tired. And then he thought, the smart species that the humans are, they would probably be able to control much of the stuff in the world. So he went off to sleep, dreaming about mountains, mangoes, daisies, beaches, rainbows, women and some of his other beautiful creations. 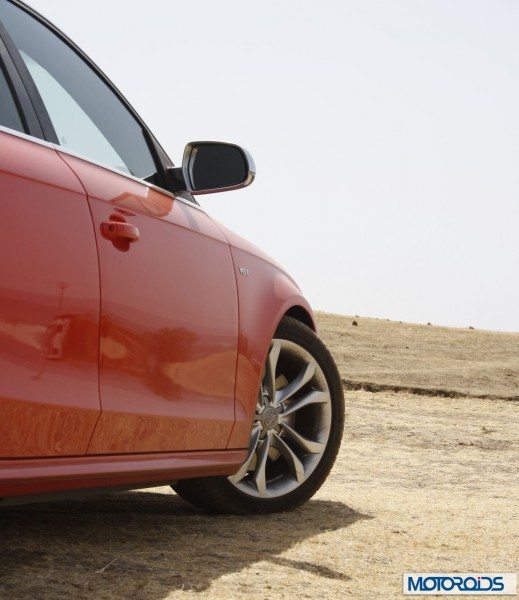 He slept for centuries, before popping off his bed, having been woken up by some really cacophonous music. As he peeped down from the clouds to see what was wrong, he couldn’t believe his eyes. The so called music was blaring out of a Punjabi guy’s supercar outfitted with JBL woofers procured at a discount from Khan Market in New Delhi. The windows were duly rolled down even in freezing January cold, so people could see his face as he ambled through the streets of South Ex. He slowed down whenever he saw members from the opposite sex, craning his neck out and giving them ‘the look’. He had a conceited smile plastered across his face which remained unaltered even as he was bombarded with a barrage of cuss words. The man had a pair of earplugs on for aural protection, both from the music and the profanities.

He thought he was cool. He thought he was smart. He thought he had taste. And most of all, he thought women would like him the way he was. To sum it up, this human being had an entirely distorted definition of all the virtues that god thought would enable humans to be the safe keepers of the world. Furious, god decided to wipe the human race off from the planet. And just as he was about to do it, he saw a blonde-browed bloke in Germany driving with his family in his car. He drove within the prescribed speed limit. He was careful with his maneuvers lest the little kid sleeping in the backseat might wake up. He respected the law, he loved his wife, and appeared genteel in all his manners.

‘Hmm, it’s not as bad as I thought after all’, God said to himself, and went back to sleep. A few minutes later, the man dropped his wife and kid home, and took to the Autobahns with a demonic smile on his face, Armageddon Days Are Here Again – by ‘The The’ playing on the stereo. With 350 bhp at avail, he passed every other car on the road thereon, showing a specific finger to those who tried to compete. Thankfully, God was fast asleep by then. And that’s how the world was saved.

Moral of the story – if you’re a lout and still want to save the world when god’s looking, drive something like the Audi S4. Criminals lie, cheat and steal, and so do politicians – they just don’t get caught. The Audi S4, based on our experience, can be your alibi from the crime scene. 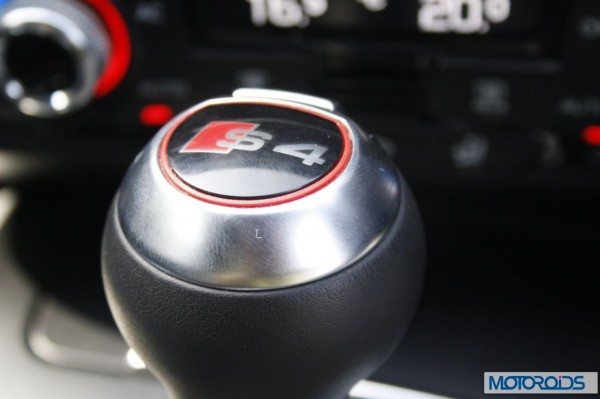 The S4, like most other S – badged cars in the Audi stable, is a much more powerful, much faster and richly appointed version of a base model – the A4 sedan in this case. Similarities with the A4 come aplenty with the overall shape, size and surfaces being almost the same. For the trained eye, however, it wouldn’t take more than a moment to know that it isn’t quite the usual stuff. Subtle, but unmistakable enhancements over the A4 add a savory dash of sportiness to the car, creating ample distinction without trying too hard to ask for attention. 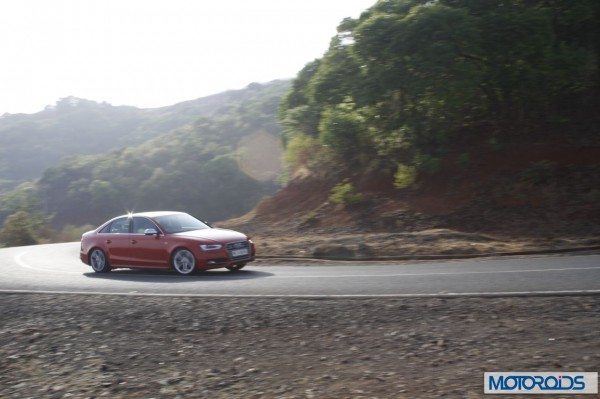 Some of the more prominent differentiators include the silver finish ORVMs, the distinctively detailed grille with the S4 badging and the liberal dosage of chrome across its face. Bigger, distinctively styled eighteen inch wheels, as against the smaller 16 inchers on the S4 are another prominent giveaway. Finally, quad exhausts would happily officiate to dispel any doubts someone may have about the special status of this car. The S4 isn’t a proper sleeper, but it’s subtle enough to make ignorant brats pop in their seats when you whiz past like a missile. 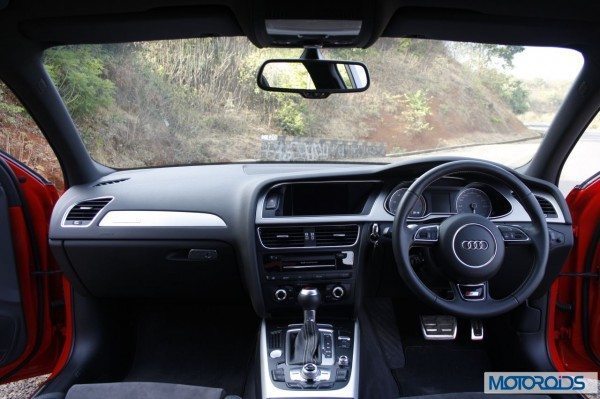 The differentiation with the A4 is even more pronounced on the inside. Special materials and design touches abound to make the S4’s cabin an even more special place to be. The seats, to start with are draped in Alacantara. The three spoke steering wheel is a racier unit. It has a sporty feel to it, and looks great too with the S4 badging at the bottom. The interior, done primarily in black, features plenty of aluminium and chrome finished inserts raising the sporty quotient within the cabin. The go-faster character of the car is further accentuated by the aluminium finish accelerator and brake pedals with rubber strips. The brushed aluminium inserts on the front door panels look fabulous and speak volumes for the immaculate workmanship. 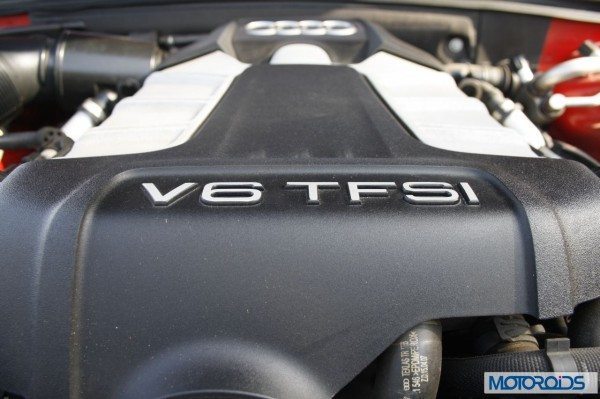 The drive selector knob on the car does its own bit in upping the sporty quotient further. The flat headed round knob has a red S4 logo emblazoned on it. It’s an emotional thing, the racy font and the sporty S4 badging makes your heart pound hard in anticipation even before you have put the car in motion. Adding further to the emotional element is the instrument binnacle. Offering great respite from the boring black dials, this one has been done in a tasteful light grey shade marked in a racy white font with the S4 emblem at the bottom pepping things up nicely. 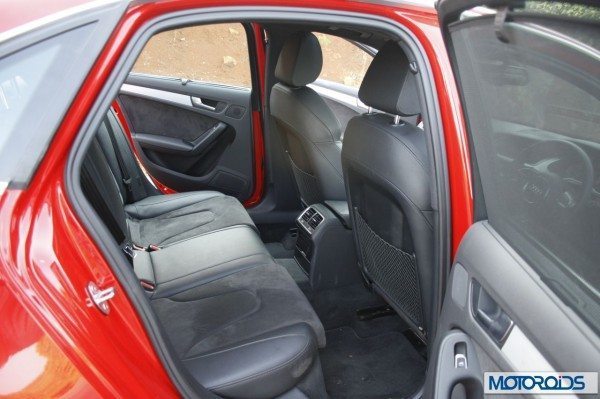 Quality apart, there is ample room inside the cabin too. Volume wise an A4 from the inside, the S4 enjoys liberal cabin space of its sibling. The back seats have ample head and legroom with good thigh and back support.  The boot is voluminous too making the S4 as practical as it is sporty.

Under the bonnet of this unassuming sedan is an engine which is as evil as it is gracious. The 3.0 liter direct injection V6 engine is capable of producing peak power output of 333 bhp between 5500- 6500 rpm and 440Nm of peak torque between a flat and wide 2900 – 5300 rpm band. Absolutely muted and vibe-free at low rpm, this engine turns into a different monster as the revs build up. The engine is paired with the S-tronic dual clutch 7-speed transmission, known to be one of the best auto transmission systems in the world. Well sorted ratios on the tranny are complemented by smooth, lightening quick shifts. 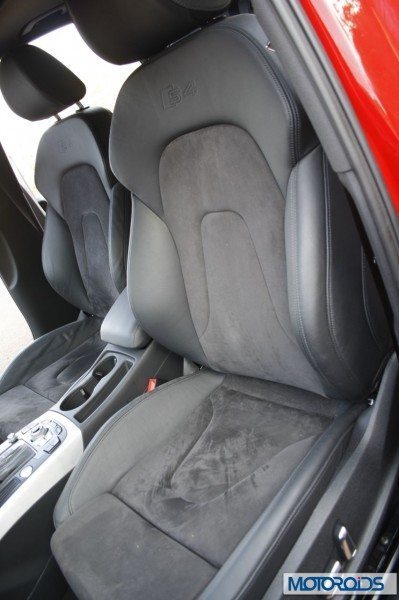 There are five drive modes to choose from – efficiency, comfort, auto, dynamic and Individual. Based on the mode selected, the electronic brain chooses the transmission shift points, steering stiffness and damper tautness – pretty much like most cars in the premium segment. In addition to letting the car choose the gears for you, you can also shift manually via the drive selector or the immaculately finished flappy pedals behind the steering wheel. 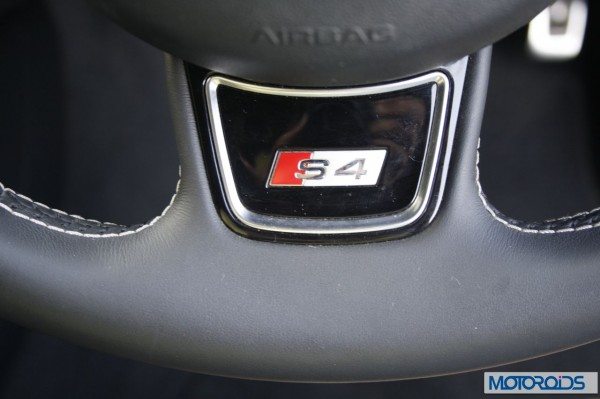 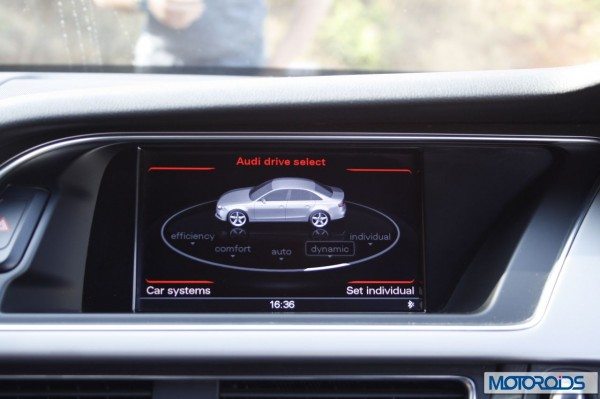 Once on the move, the 333 horses make themselves apparent with a pronounced shove as you bury the pedal. Being a supercharged unit, this engine is exceptionally responsive, delighting with its linear power delivery and ample torque. The tasty part of the abundant power builds up post 3000 rpm, after which the rev needle swings enthusiastically all the way up to the 7000 rpm.

As we mentioned earlier, the most endearing bit about this engine is its dual character. It’s extremely quiet, well-mannered and docile as long as you feather the throttle – perfect for trundling around in city traffic, ferrying wife to the in-laws’ place and back. But bury that pedal, let the revs build and watch in awe as the engine spawns a pair of horns and a pointy triangular tail – within the blink of an eye it transforms into one of the most devoted  disciples of Satan. The hitherto muted engine begins its chatter with a burble and as the needle swings past 6000 rpm, roars aloud to exhibit its testicular fortitude. The performance on the road matches the sound emanated by the engine. 0-100km/h sprint is achieved in less than 6 seconds with a top whack of 250km/h. 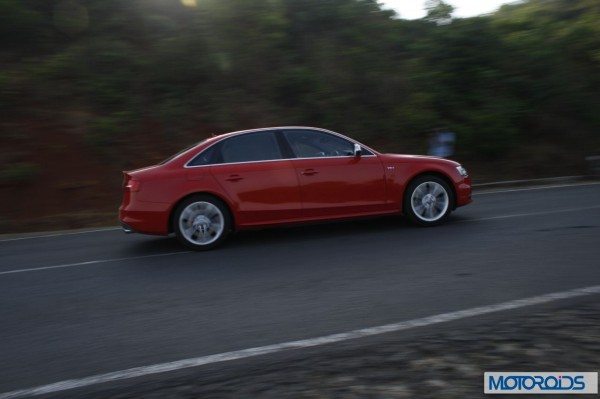 And just because it’s an S badged ‘Sporty’ saloon doesn’t mean that it rides on a quartet of iron rods. The S4 rides surprisingly well on broken pieces of tar and takes the rough patches in its stride with unusual confidence. The ride quality is absolutely remarkable for a sports car in a sedan’s guise. Even in Dynamic mode, where everything from steering tightness, transmission shift points and damper stiffness is targeted at achieving maximum acceleration, speed and best handling, the S4 offers a reasonably cushy ride where only the more pronounced undulations manage to shake you up within the cabin

As regards dynamic ability of the car, the trusty old Quattro AWD system makes sure that there is never a dearth of grip for the S4. There is, however, an overwhelmingly artificial feel to the steering wheel, especially when it excessively stiffens up in Dynamic mode. Turn-ins don’t feel natural, and there is some sense of disconnect between the road and the steering wheel. The car puts a reassuring foot forward though, with no nerviness even at the limit. Around the bends, the elasticity of the steering creeps in again, and the S4 also has the tendency to under steer. There is no taking away any grip from the tyres though with the fabled Quattro at work, and the S4’s set of four wheels are more than capable of handling those 333 well raised German horses. 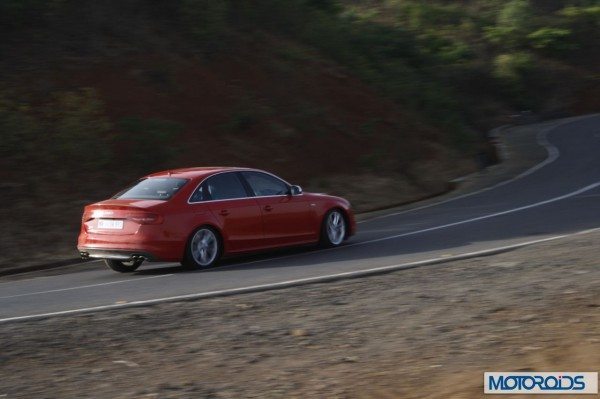 While not an overly bothersome glitch, the ride height of the S4 remains an issue. During our 500km drive, we felt the underbelly of the car scraping with quite a few speed breakers. The problem is a little less pronounced when you have only the driver or the co-passenger occupying the car. However, with four aboard, and some luggage thrown in, you’d better be careful. With soaring fuel prices, the relatively low fuel efficiency as compared with diesel propelled machines should be another concern. We would, however, like to assume that if you’re ready to fork out upwards of half a crore for this car, a few thousand bucks extra for a long trip isn’t going to disturb you much.

Sure, the S4 isn’t one of the most economical cars to own and maintain. It retails for an OTR price which is around Rs 50 lakh. With a 3.0 liter supercharged engine, it runs on petrol, which, well, makes it a little more expensive than usual to run as well. But here’s the thing – if you’re looking at something which can fit in as a family sedan, and still shoots from the standstill as a missile, you don’t really have much choice. There really aren’t any ice daggers as lethal for the price.