As can be seen in the image, the updated Skoda Rapid will receive some cosmetic changes to the exterior. Changes visible include black inserts for the headlamps with projector units, black surrounds for the grille and also blackened wing mirrors. Special 16-inch ‘Comet’ alloy wheels and blackened fog-lamp inserts will also be offer on the 2015 Rapid. Blackened styling bits on the special edition could imply that the car maker will be offering a black edition with the 2015 Skoda Rapid when it launches this month. 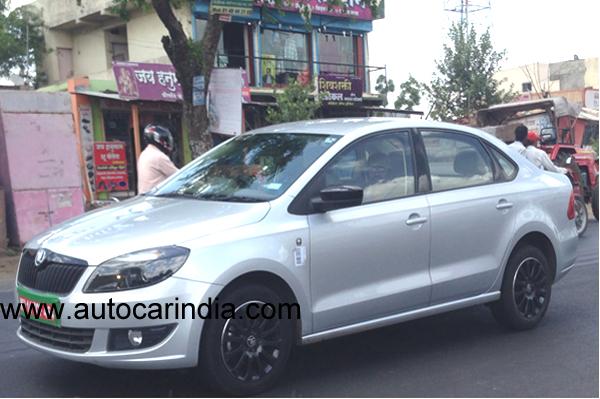 Although the updated Skoda Rapid will mostly feature cosmetic updates, the mechanicals of the car will be updated thoroughly. Powering the diesel Rapid will be an all-new 1.5 liter oil burner which will develop 104 bhp and will come mated to a manual gearbox as standard and a DSG automatic gearbox as an option. Similar to the Vento TSI, the Rapid will also get the 1.2 liter turbo petrol TSI mill which will come mated to an automatic gearbox.

Stay tuned to Motoroids for more dope on the 2015 Skoda Rapid India launch and other details.