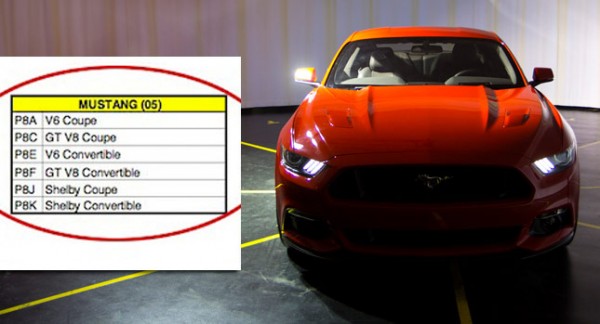 It seems like Ford is in no mood to wast any time to expand the new 2015 Mustang line up, which goes on sale late next year.

Seen here is a “2015MY Ford Body Code Types” chart that surfaced on the  Mustang6G  forums recently and to our surprise- listen in this chart are Shelby Coupe and Convertible variants!

It is being said that the upcoming Shelby variants will be sold with the Shelby GT350 moniker .

The poster of this chart said: “So I just went to order 2015 promo stuff, they list all 2015 models for vehicle photographs and guess what, there is a Shelby GT350 listed!!!!!!! oh by the way, this is dealer promo stuff so its legit, not a shelby ship thru package.“

In all likelihood, the new GT350 will be powered by a 5.0-liter Coyote V8 motor that will have more than 420 really healthy ponies. Unfortunately, it will be less than the current GT500’s 662-horsepower, which are produced by a 5.8-liter V8.

Stay tuned to Motoroids for more updates on the 2015 Ford Mustang Shelby models.