It has surely been quite some time since the advent of some new SUV in India (please note, we aren’t talking about the dime-a-dozen crossovers here). However, that doesn’t take away the fact that the car buying lot of our country is totally crazy about SUVs. From the Tata Safari and Mahindra Scorpio to Range Rover and Mercedes G-Wagon, there is a SUV that caters to every budget and taste in India.

While the Rangies and the G-Wagons are quite stratospherically priced and can’t be bought by many, there have been SUVs like the Toyota Fortuner, Ford Endeavour, Mahindra XUV500, et al, which have been loved by the massed and bought in great numbers. Out of these few names mentioned here, while the Fortuner rules the roost and the XUV has been posting decent sales ever since it was launched in the country, the Ford Endeavour seem to no longer enjoy the heydays it once did.

However, this might come to an end as the next generation 2015 Ford Endeavour is due for its global debut on 3 February, 2014. And what can be better than the fact that the next gen Endeavour will make its public debut in India! 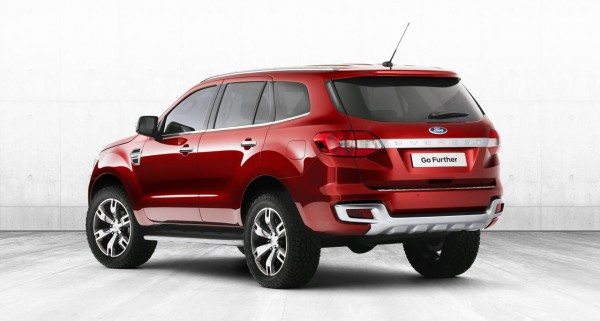 Thanks to Ford revealing the images of 3rd generation Endeavor (aka Ford Everest in most international markets) last year, we already know what the new SUV would look like and simply speaking, we quite like what we see!

It is being expected that the new 2015 Ford Endeavour will be powered by a range of new TDCI diesel engines. Most probably, Indian market will get a 2.2-litre common rail diesel engine that will have a max power of 170 BHP and peak torque of 400 Nm.

Other than an all new design and powertrain, the new Endeavour will also get a new suspension at rear, which would replace the current model’s archaic leaf spring setup. There are good chances that the new car will come loaded with gizmos and features such as- voice command, SYNC, hill assist, ABS, a full quota of airbags and plenty more!

It is expected that the all new 2015 Ford Endeavour India launch would happen towards the end of this year and the new model won’t be much pricier than the current model.

Also, the new 2015 Ford Endeavour, in all likelihood, will be showcased at the Auto Expo 2014.

Stay tuned to Motoroids for updates on new 2015 Ford Endeavour Release date and other details.