The boffins at BMW have showcased the new 2-14 BMW 4-Series Convertible at the ongoing 2013 Tokyo Motor Show.

The convertible variant of the 4-Series comes with a three-piece retractable hardtop that boasts of sound-deadening headliner. The hard top can be retracted upto speeds of 18 kmph, in just 20 seconds! The BMW 4 Series Convertible comes equipped with three-temperature neck warmers, which allow you to enjoy your drive with the top down even in winters. With the roof up, the car has a drag coefficient of 0.28, and it increases to 0.33 when the car goes topless. 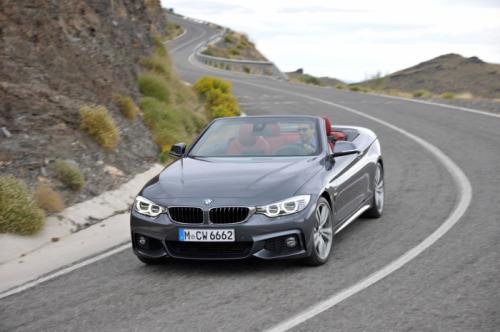 The 4-Series will be offered in the 428i guise in the United States. This model will be powered by a 4-cylinder, 2.0-liter turbocharged engine producing 240 bhp of max power, and 345 NM of peak torque. The car propels from 0 to 100 kmph in just 6.2 seconds. Top speed is electronically limited at 250 kmph. Also, the 435i will be on offer with a larger 3.0-liter inline-six, which produces 300 bhp and 406 NM of torque. This engine propels the car to 100 kmph in just 5.5 seconds and is also electronically limited to 250 kmph.

All the above mentioned engines will be mated to an eight-speed automatic gearbox with Normal and Sport transmission modes on offer. The 428i also gets an optional xDrive all-wheel drive system. A 420d model equipped with a 4-cylinder, 2.0-liter turbo diesel engine which produces 181 bhp will be offered in Europe. The Euro-spec car will be available with a six-speed manual transmission and an optional 8 speed automatic transmission.

BMW will offer the 4-Series Convertible in United States in Sport, Luxury and M Sport trim levels, while European model will also be offered with Modern.