The recent collapse of the A1 GP series, has motivated Narain Karthikeyan to check out other racing options. The ex-F1 driver participated in the NASCAR ARCA series test which was scheduled from December 18-20 in Florida. On the first day of the ARCA series test he drove for the Starbeast Motorsports team. Narain also revealed that a line up of options are there for 2010 with the most significant among them being NASCAR. 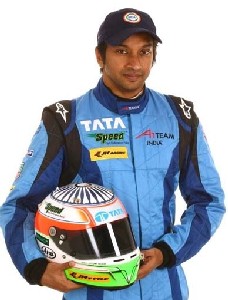 The Times Of India newspaper carried quite a few quotes given by the Fastest Indian in its edition dated 24th December. Narain commented that it is a whole new ball game out there and he was lucky enough to be invited for a few sessions. He said that NASCAR racing is pure, more basic with its oval tracks and inclined speedways. It was a new experience for him in driving heavier cars with spotters speaking to you all the time.

Speaking about the collapse of A1 GP series, Narain said that the financial downturn has caused havoc but if it survives he will be there next year. According to him it is a great series with a lot of competition. Narain frankly admitted that if things remain the way they are then he will have to sit down and discuss the future course of actions.

Narain Karthikeyan is the only Indian driver to have raced in Formula One. His F1 drive with Jordan team lasted for an entire season after which he started driving for the Indian AIGP team. The future existence of A1GP looks doubtful as it currently faces a ‘pull out’ threat from its sole engine supplier Ferrari.  This year he participated in quite a few Le Mans series races driving for the Kolles Audi team.