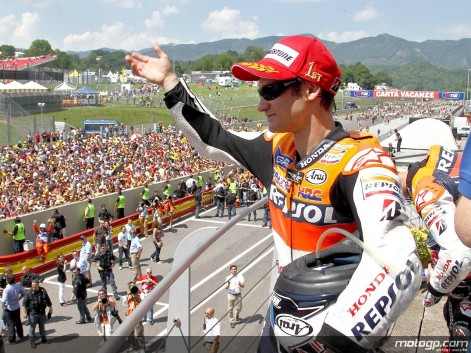 Race Report : Harkamal Singh
It can be called the one of the biggest disasters in the 14 year Motorcycle Racing career of Defending World Champion Valentino Rossi as he broke his right shinbone in a big crash during practice session at Gran Premio d’Italia. Later on he had an operation. The local Italian crowd was badly disappointed as they missed their all time favorite racer.

After a good start Lorenzo soon realized he couldn’t keep the pace he was running during practice. After quickly losing ground on Pedrosa it was Dovizioso who brought stiff competition to Lorenzo throughout much of the Italian GP.
With great starts off the line Yamaha Tech 3 rider Ben Spies and Honda’s Dovizioso were able to advance quickly from their start on the second row. In third-place before the end of the first lap, Dovizioso was able to make a pass on Ducati Marlboro rider Casey Stoner with Spies in hot pursuit.
San Carlo Honda’s Marco Simoncelli had an early run-off as he pushed for the top spot in the opening laps. His teammate Marco Melandri was also riding hard and fought his way up to sixth from 14th on the grid.
Meanwhile Pedrosa’s pace seemed unobtainable to the rest of the riders as he created a new circuit record during Lap 5. At the same time Ducati’s Nicky Hayden had a disappointing outcome at Mugello when his Desmosedici GP10 front-end folded on him while he went through a downhill turn.
By the halfway point in the race Pedrosa’s lead had stretched to 7.309 seconds ahead of the second racer. Dovizioso and Lorenzo were much closer and were trailed by Melandri, Honda’s Randy de Puniet and Stoner who were all struggling for position.
Another rider who suffered disappointment at the Italian circuit was Pramac Racing’s Mika Kallio, who crashed out after an old shoulder injury began causing problems.
In the final stages of the race. Pedrosa’s win became more apparent, but is was Lorenzo and Dovizioso who delivered much of the excitement in their quest to take second-place. Opening up a slight advantage was Lorenzo who was able to secure second position as he crossed the finish line.

Spies took seventh-place in his first race at the Italian circuit while another rookie, Aleix Espargaro of Pramac Racing, took eighth. After recovering from his earlier run-off Simoncelli was able to take ninth with Rizla Suzuki’s Loris Capirossi rounding out the top-10.
It was great to see Jorge Lorenzo who showed a true sportsmanship when he wore Vale’s tshirt at the podium. “It was very strange today without Valentino,” said Lorenzo. “I am so glad the fans honored him so well. I wanted to win to dedicate the victory to him but that wasn’t possible so all I can do is say ‘get well soon.'”