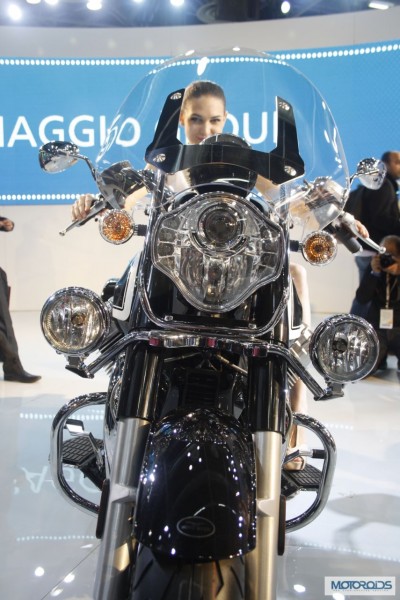 Piaggio India lined up some exclusive machines from the brands it owns to add some more eye candy to its exhibit area at the 2014 Auto Expo. The visual highlight of their stand was the California 1400 Touring bike from Italian Moto Guzzi. Moto Guzzi (founded in 1921) is one of the oldest and most distinguished motorcycle brands in the world

The California 1400 Touring marked a turning point in Moto Guzzi history with its innovation and style. The big bike is favoured by and revered by long-distance bikers. The 40 year old California nameplate has patrolled the American freeways, escorted monarchs and presidents, been parked in the garages of rock stars and cinema divas, establishing itself as the motorcycle gold standard. Fresh from its market debut, the California 1400 – in Touring and Custom version – is the Moto Guzzi flagship and one of the largest motorbikes ever built by a European constructor. 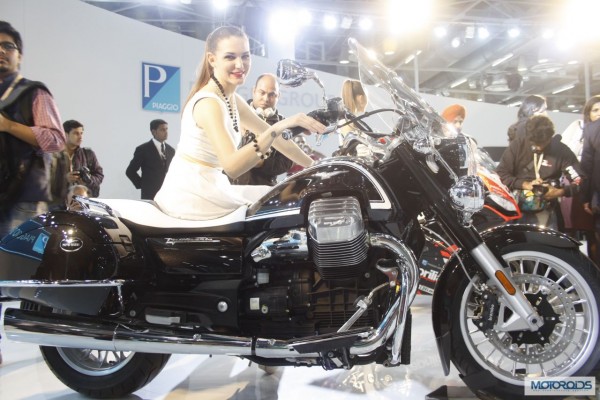 The California 1400 Touring was named in the Best of the Best Luxury Portfolio for 2013 by the American magazine regarded as the international authority in the luxury segment for almost forty years. The Moto Guzzi California 1400 won further important recognition from the United States in August 2013, when it took first place in the Cycle World competition’s Cruiser category.

The tech specs of the Moto Guzzi California Touring are provided below, followed by an image gallery from the 2014 Auto Expo