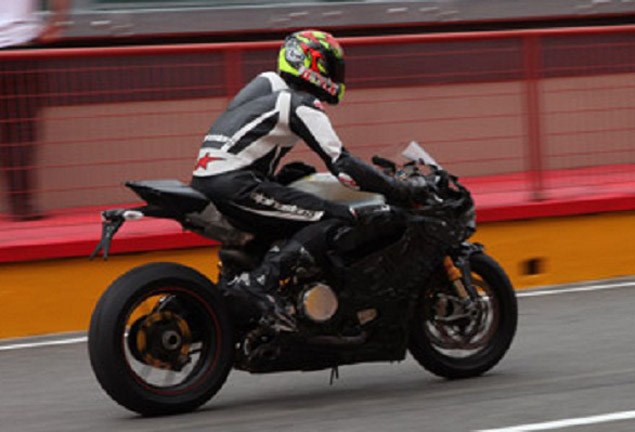 These are the latest spy pictures of Ducati’s 1199, the 1198 replacement, and the most exciting bike launch in sight in an otherwise boring 2011. Recession is a bad, bad thing, and the motorcycle industry doesn’t quite seem to have managed to raise its head above the recession quicksand yet.

Apart from all the things we told you about the 1199, most of which are revolutionary by Ducati standards (read our earlier report on the bike here), a new revelation from the recent pictures is an exposed exhaust pipe. The pipe from the front cylinder is running longitudinally for quite a bit before merging into the stubby exhaust. The header pipe runs long enough before merging with the exhaust can – the length may just facilitate that extra bit of power and torque for this machine.

The pictures show two different versions of the bike – one black and one red. Seems like the black variant is the sportier SP version, and is fitted with Ohlins front forks and a different design for the alloys.

The bike will most likely employ the MotoGP derived stressed airbox frame in place of its traditional trellis frame. Company’s factory riders are reporting stupendous performance, but being from the company itself, their reviews need to be taken with a pinch of salt. Moreover, that stressed airbox frame doesn’t seem to be helping Rossi too much this season.

We have high expectations with the new bike, as Ducati is, indeed doing a lot of new stuff with it. Hope it offers some serious fight to the BMW S1000RR when it emerges in the showrooms. Bank on us for all the updates about this exciting machine