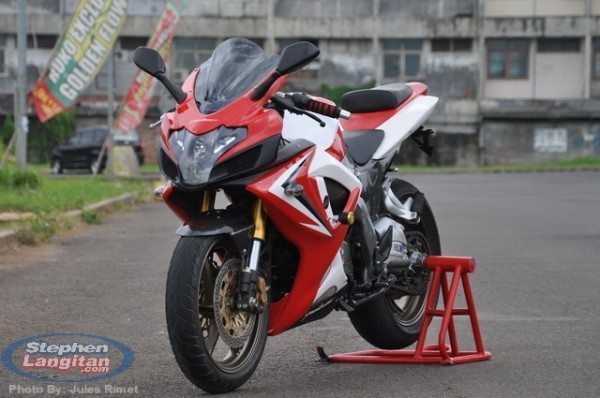 The bike hits a speed0 indicated top speed of 150kmph, has enough torque to make high speed overtaking maneuvers a breeze and has the best headlamp setup on any below-250cc bike in the country.

While the Yamah R15 might be much faster around corners, the 220 ruled the straights, until of course, the advent of Pulsar 200NS and KTM Duke 200. 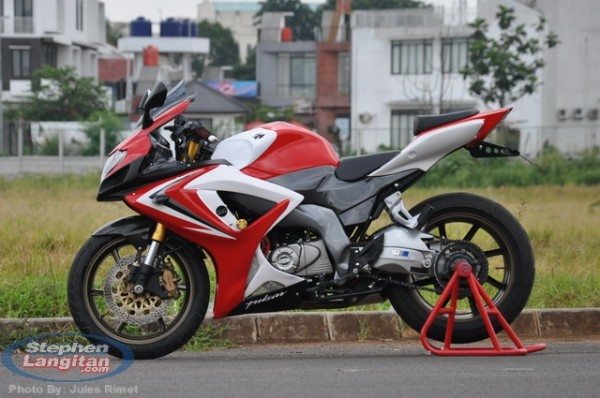 With a quarter fairing that sports projector lamps and RVMs that might remind you of Bugs Bunny, the 220 stands out from the usual crop of 150cc and 180cc Pulsars. However, the bike does share a plenty of bits with the lesser siblings and this is a put-off for some.

It seems like our friends at Indonesia have decided to change all this with a thoroughly modified Pulsar 220 (aka Rouser 220).

This Rouser 220 is quite an a-Rouser and we so want Bajaj to take loads of design cues from this customized bike.

The modified Rouser 220 that you see here is built on an Aprilia Deltabox frame. The fairing, fuel tank and most of the body panels seem to have been taken from a 600 cc Gixxer. The fairing supports the same old headlamp and while the front-look might not be to everyone’s taste, the front end of the bike looks absolutely stunning when viewed in profile. Oh, and the Bugs Bunny ears continue to perform the duty of RVMs. The front section also gets upside-down forks from the R6 along with the R6 front disc brakes. The 17 inch rims and the swingarm seem to have been donated by a Honda RVF400. The rims come wearing Michelin rubber, with the front getting 120/70 and rear getting 180/55 spec footwear. 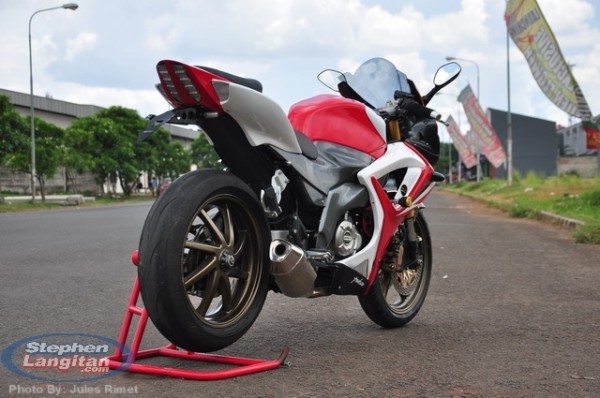 The bike also gets a new end can that, in typical superbike fashion, is much smaller and aesthetically more appealing.

It isn’t for sure if the bike also gets an upgraded engine. But with a superbike’s tyre at the rear, it better does.