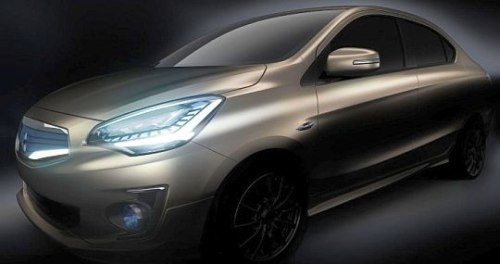 Japanese auto maker Mitsubishi recently published a teaser image for the G4 concept sedan, a concept car that is being expected to spawn the Mirage compact sedan.

The Mitsubishi G4 compact sedan will be unveiled later this month at the 2013 Bangkok Motor Show and powering the G4 will be a 1.2 Litre petrol engine that has a max power output of 77 Bhp and a peak torque figure of 100 Nm.

The low capacity petrol engine is an indication enough for everyone to speculate that the G4 concept will give birth to the compact sedan body variant of the Mirage hatchback. It may be noted that the same 1.2 litre petrol engine that powers the hatchback.

The Mitsubishi G4 concept car comes with a striking exterior design that is quite the opposite of the much more conventionally styled Mirage hatchback. This could lead to a more radical styling for the Mirage Compact sedan. Exact details on the G4’s exterior styling will come to light only when the car is showcased at the fast approaching Bangkok Motor Show. Very much like the Mirage hatchback, which is Mitsubishi’s entry level hatchback, the Mirage CS is slated to become the least priced sedan in the car maker’s stable.

The Mirage has been selling in good numbers in South East Asian markets and a Mirage compact sedan based will, in all probability, have Mitsubishi laughing its way to the banks.

The Mirage CS will battle it out against the Maruti Suzuki Swift Dzire and other compact sedans in South East Asian countries. HM-Mitsubishi has stated that it intends to keep its focus on gaining a foothold in the SUV segment of Indian car market and there are next to no chances of the Mirage CS coming to us.