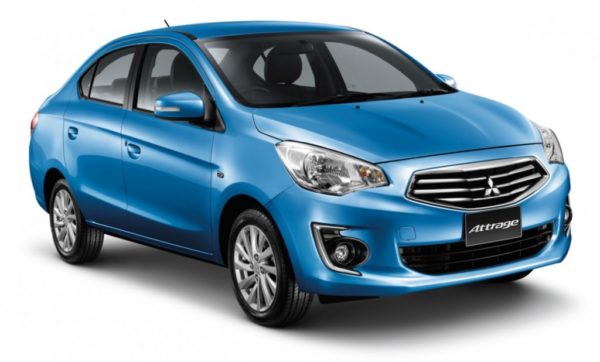 We now finally have official details of the new Mitsubishi Attrage, the Japanese auto maker’s new ‘Global Compact Sedan’. The Attrage is just a month away from entering the Thai car market and the new Attrage will be a participant of the Thai Eco Car Project. This will entitle the new compact sedan to benefit from subsidies provided by the government of Thailand.

Mitsubishi claims that the new sedan has a fuel efficiency figure of 22 kmpl. This makes the new sedan eligible for participating in the Eco Car Project, which requires the participants to have a fuel efficiency figure of at least 20 kmpl. One of the main reasons for the Attrage to have a stellar fuel economy figure is the usage of Reinforced Impact Safety Evolution (RISE) body. Mitsubishi feels that the RISE will allow the car to be the lightest in its class. Another big reason for the high fuel economy figure is the car’s low coefficient of drag, rated at just 0.29 cd.

The Attrage is basically a Mitsubishi Mirage derivative and the new compact sedan is a Nissan Sunny and Hyundai Verna adversary.

Powering the Attrage sedan is the same 1.2-litre, three-cylinder, MIVEC engine that powers the Mirage hatchback. The three pot motor has a max power output of 76bhp and a peak torque rating of 100Nm. The Attrage will be offered with two transmission options- a5-speed manual and a CVT automatic gearbox.

The Attrage isn’t coming to India. Very good chances that the Cedia is the last of the Mitsubishi sedans that we will see for some years

Mitsubishi partners with Hindustan Motors for its Indian operations. The Lancer, the Cedia and the Pajero are some of the popular models that Mitsubishi has sold in India. While the Cedia enjoys the reputation of being a driver’s car and is a hot favourite among budding Indian rallyists, the Lancer and the Pajero enjoy almost a cult status in the country. Mitsubishi-HM still has a long way to go in terms of after-sales and service network. However, the manufacturer is surely well recognized in the country and a compact sedan from the famous Japanese automaker has good chances of tasting success in the sub-continent. Having said that, we do realize that the Attrage has next to nil chances of coming to us as the carmaker has already announced on a couple of occasions that it intends to keep its focus only on the SUV segments of our car market. This is quite a shame as the Attrage appears to be a car that might become a high selling C segment contender in our car market and could revive the fortunes of the ailing car maker in our country.