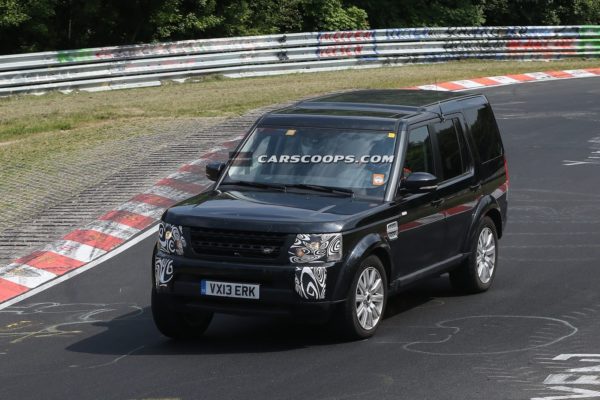 It has been more than two years since the good folks at Tata Group owned Land Rover have come up with some cosmetic updates for the Discovery, which is also sold as the LR4 in North American car market. While the car got an 8-speed automatic transmission and some technology updates earlier, the British car maker has now decided to endow the LR4 with a set of minor styling updates to improve its sales performance.

Seen here is a 2014 Land Rover Discovery prototype that was recently spotted testing on the Nürburgring. The SUV was caught wearing camouflage on the front lights and parts of the bumper. The car also sports new design ORVMs. Other than all this, the car was seen unchanged and it seems like the facelift would be really mild in nature.

It is being said that the new 2014 Discovery’s updated headlamps would get LED fixtures, something that the car would borrow from the more premium Range Rovers. We won’t be too surprised if the car also gets a slightly restyled front grille, new design alloy wheels and new fog lamp housings for the front bumper. We also expect the car to get some additional equipment and a complete upholstery change for the interiors.

It is also being said that the updated Land Rover Discovery will be sold in certain markets with a new 3.0-liter supercharged V6, which will be borrowed from the 2014 Range Rover. This engine produces 335 horsepower.

Go to next page for spy pics of updated Disco.